ALBUM REVIEW: The Defects muscle it up on Feed The Good Dog

WITH the parlous state of the world at the dawn of 2018 The Defects have lashed out in furious form for their new release 'Feed The Good Dog'.

For years the risk to the world was 'limited' to climate change, but with a buffoon in the Whitehouse, an overtly aggressive Kremlin, tensions in the Korean Peninsula and the reality of 'fake news' The Defects have ramped up the vitriol.

From the off there is barely controlled rage as the fury rails in the words and is reflected in the music. 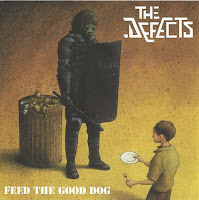 Despite a heavier edge to each track the essence of The Defects is not lost. Choruses and melodies still lurk with ominous catchiness, urging the listener to singalong to compulsively join in.

Of course, those who know and love The Defects will be those who may be accused of conformation bias as they will, undoubtedly, share their world view, but the strength of the emotion on these tracks almost deserve the lyrics to be shared more widely.

But, it is not all invective. The nostalgia dripped 'Gate Crash' harkens back to the days those of a certain age, did indeed crash the 'Blue Lamp Discos' cops used to hold to keep the 'bad uns' off the streets.

And, 'Action Junkie' dub is a penultimate relief from the all-out assault.

For all the rage on display Glenn Kingsmore's song writing is well balanced, and the performances of all members teeter on that edge of chaos and brilliance that few can manage in the modern rock and punk world.

Buck's voice drips glorious hatred against Roy's staccato riffing as Aidy and Glenn lock down rhythms that will both have your head nodding and instinctively have you ready to pogo and mosh.

While you can pick out stand-outs such as 'The Wisdom of Norman'  and '30 Billion Dollar Swindle' what is striking about 'Feed The Good Dog' is the coherence of the album, the feeling that this is a complete package.

Despite the primal feelings all the songs this is also an album that deserves repeated listens: for all the heaviness and fury there are subtle devices here that elevates it well beyond the tired clichés trotted out by so many in the genre.

It is a risky claim, but this is an album you need in your collection.

Feed The Dog is out now on Punkarama Records, and via The Defects web page. 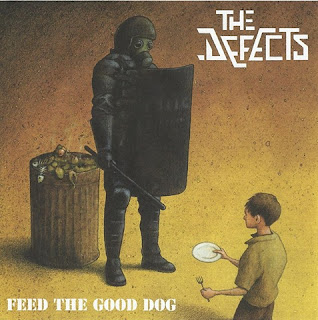