ANVIL are heavy metal legends who have had more than their fair share of bum deals. While many would have given up and gone home after having to deal with less than half of the shit these guys have had to cope with, Anvil only seemed to resolve themselves more to keep going.

And, thank the metal gods they did, otherwise ‘Pounding the Pavement’ may never have been made.

This album is real heavy metal gold kicking off with a weighty driving melodic track ‘Bitch in the Box’ which you will just keep head banging to only to realise half way through that they are singing about how frustrating a satnav is. 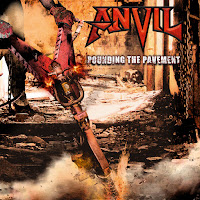 It really is one of those rare ‘WTF?’ moments that will just raise a smile out of you before you get back to headbanging. It sets a fantastic tone for the rest of the album and you will just want to listen to it again and again.

Firing off fast and heavy is the next song ‘Ego’ showing Anvil are adept at spreading razor-sharp guitar riffs over the dynamic rhythm foundation, Kudlow adding additional bite with his familiar raw vocal style.

Kudlow tells the world that he will ‘Do what I Want’ as this up tempo hard hitting heavy track sounds like an anthem that will be a fan favourite at any gig. The guitar riffs chug along like a freight train at perfect headbanging speed – and you will really want to.

This is heavy metal at its finest.

Next up is ‘Smash Your Face’ pumps up a slower but no less weighty track that is reminiscent of Black Sabbath. It’s like Anvil are having a wee go at stoner rock but changed it to pure metal. And, boy, is it glorious.

Then comes the title track ‘Pounding The Pavement’. An instrumental of monumental proportions with chunky slamming drums, muscly riffs and rumbling bass. It is beautiful and if Doctor Who ever went metal, this would be the theme tune.  Allons-y!! 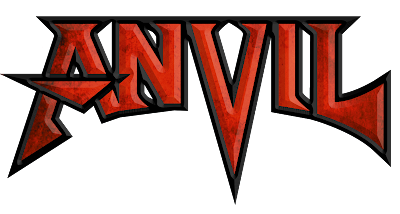 Back to normal with ‘Rock That Shit’ where Anvil meets a blues infused rock and roll with their usual fervour. It is a glorious upbeat rock and roll meal reminiscent of hard rock and Chuck Berry.

You will love it. You will smile and rock around the clock, or the house – whichever you find easier.

No.  ‘Let It Go’ is not an Anvil cover of a Disney song (though that would be quite interesting). This track hammers out frustration, Anvil style. Its melodies, riffs and chorus have it marked out as another amazing anthem.

Then Anvil pull of a fantastic epic song with ‘Nanook Of The North’. Kicking off a little like Aerosmith it quickly assures you it is something else entirely. Again it is a solid, fist pumping, foot thumping track that brings you to the far north where the Inuit live. It is a protest song about oil drilling, but one of the best protest songs out there.

‘Black Smoke’ is a hard and fast rousing moshing track that screams Motorhead ‘Ace of Spades’ in bucket loads, but supremely Anvil at its core.  If you are tidying your house, you will do it in double time to this.

Next up is definite stoner like ‘World Of Tomorrow’, a tune full of heavy Black Sabbath chugging sound that is pure ‘Sweet Leaf’. Filled with dark depressing and oppressive bass and guitar riffs, it is a fantastic track.

Almost at the end now and they will have you ‘Warming Up’ quite nicely to the whole album and ready to listen over again. This rockets in with fast drum rolls booting up a fast flowing guitar filled rhythm and blues to get your feet moving. Again, a bit of a fast and furious Black Sabbath feel about it.

Lastly is the bonus track, ‘Don´t Tell Me’ a venom filled uncompromising track full of frustration pouring out of Kudlow’s vocals. What a way to finish the album!

Overall they have a real Motorhead crossed with Twisted Sister undercurrent, especially highlighted with Kudlow’s vocals pelting out the songs in such a rough and raw way.

Indeed he sounds like the lovechild of Lemmy and Dee Snider. This is of course intermixed with a Black Sabbath sensation through some of the songs.

Throughout, you can feel the nostalgic cheese thrumming through the rocking tunes as if Spinal Tap and Bad News had combined to make a super duper group. It is a joyous thing indeed.

Now, this is in no way takes anything away from the band and ‘Pounding the Pavement’. Anvil’s sound is unique and unmistakable. They just seem to have thoroughly enjoyed writing and making the album. It certainly comes across that way.

It is an absolute priceless musical diamond . The heavy pounding melodies and crunchy riffs are sublimely metal at its most perfect.

You will love this beauty and may well wear it out, as the different styles of tracks will just keep you entertained throughout the day and night. This is the anti-depressant you have been looking for. No prescription required. 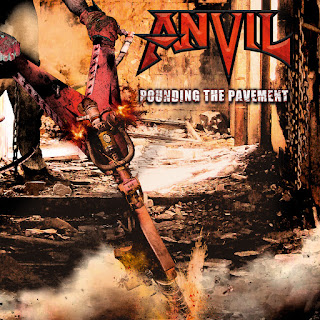