ALBUM REVIEW: Does Kill the Unicorn dream of an electric Prism?

WHAT do you get when you cross metalcore with 8-bit gaming and jazz? Kill the Unicorn, an avant garde Swizz band formed in 2014. And, an interesting concept it is too.

Their latest album ‘Prism’, released in late 2017, is a really…. interesting listen. It’s as if Thy Art is Murder had a lovechild with Frank Zappa and immediately started playing the Legend of Zelda on a Gameboy.

The album immediately gives you that vibe with ‘Motoko Kusanagi’, a very familiar name to anyone who knows of ‘Ghost in the Shell’, with nostalgia inducing 8-bit tones before bludgeoning you with fast and frenzied riffs. 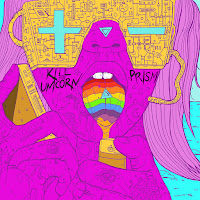 Throughout there is that undertone of 8-Bit magic as its sound rises to the top to be replicated by the guitars. All the while Pipo’s visceral guttural vocals roll along like a platform protagonist that just beat the shit out of Bowser. It’s a very well put together weird piece of metalcore that you will want to listen to over and over.

‘Dreams in 56k’ is one of the most nostalgia inducing intermissions (only 23 seconds long) you will hear. If you grew up in the 90’s and had a modem then this will both melt your heart and make you cringe with horror. No incoming or outgoing calls when that baby was running.

Next up is ‘Ode to Spot’ is a wondrous mad mix of metalcore with pure Zappa/Primus weirdness that perfectly complements the subject of the song, Spot the Cat. Yes, all you will think of is Data’s cat. And his own ‘Ode to Spot’.  Again they neatly entwine references to contemporary nerd culture in a natural fun way. And yes Pipo was counting Tribbles in there too.

On into ‘Wormhole To Gliese 556c’ is one for science geeks as Kill the Unicorn seem to make an oblique reference to Gliese 581, a recently discovered, possibly, habitable planet. As Pipo rumbles out his vocals as the band lay down a fantastically heavy track, it just drags you along into space. Again there is a little musical twist plopped right into the song. Always expect the unexpected.

As ‘F.U.C.K.U.P.’ blasts in with pure heavy metalcore, you will be trashing your head until they get to the chorus when you will stop and go ‘WTF’, which is just the Hors d'oeuvre for the weirdness main course. Which involves a submarine at one point.

Just for a bit of left curve balling, ‘Me And My Velociraptor’ is an amazing tour de force instrumental, which has such a Chilli Pepper feel at the start you almost think Anthony Kiedis is about to drop a bit of ‘Under the Bridge’ for a laugh. It then leads off into melodically epic driving riffs and thunderous drums and cymbals. Being Kill the Unicorn, they just couldn’t leave it alone with beautifully crafted slow spots and reprises throughout. A fantastic track.

Kicking you in the face. Again. Is ‘Conquistador’. A heavy thrashing track full of serious metal tonnage mixing in some catchy melodies all while pounding along like an army on the march. Fantastic.

Then comes ‘Catacombs’, a short but perfectly formed piece of rage filled vocals full of power, an unstoppable force until it hits a jazz speed bump, and then goes wonderfully weird from there.

On into a rousing thumping track in German ‘Ausgefuchst’ or ‘Crafty’ that just grabs your body and tosses you about in its own hard melodic way. It may put you in mind of Metalocalypse's Dethklok.

The penultimate tune is ‘Rendesvouz with Cleopatra’ a fast thrashy metal track that will still keep a headbanging metalcore fan happy with solid moshing breakdowns.

Lastly comes ‘Pitch Black VR’ which immediately conjures up the film that brought us the mighty Vin Diesel and the track has a chaotic and frentic dread heaving throughout reflecting the atmosphere of the movie.

Kill the Unicorn are Full Metal Alchemists who pound out a wonderfully dissonant cacophony of techno metalcore, 8-Bit insanity, and Zappa jazz. They just revel in trolling metallers by defying tradition and creating an existential heavy metal crisis. All the tracks have a schizophrenic force driving forward with an undeniable energy. The songs themselves delve into the dark dystopian side of humanity’s dependence on technology, the album has an overall hard cyberpunk ‘Blade Runner’ feel.

Kill The Unicorn’s ‘Prism’ is out now

Metalcore / Progressive / Hardcore / call it what you want...