FOLLOWING on from the critically acclaimed and commercially successful third year in 2017, Ramblin’ Man Fair returns in 2018! This year the festival will move from its traditional end of July slot to the 30th June and 1st July 2018 and hae announced

Ramblin’ Man Fair is pleased to announce the next wave of bands for the event in 2018. These include The Cult (Main Stage Headliner, UK Exclusive), Gun (Main Stage), Chas & Dave (Blues Stage), Me & That Man - Neargal (Country Stage), Goldray and Voyager (Both Prog In The Park Stage) with many more acts to be announced…

The Cult (Main Stage, Headliner / UK Exclusive Set) – Ramblin’ Man Fair are delighted to announce the first headline act for 2018 – British rock legends The Cult. Formed in 1983 (although becoming The Cult in 1984), the band have gone to sell over 10 million albums worldwide. The distinctive vocals of Ian Astbury and guitar playing of Billy Duffy inspired a generation of young rock fans and the bands influence and legacy can’t be underestimated – from playing seven sold out nights at Wembley Arena to taking little known band Guns N Roses out on their first USA tour. Ian Astbury was also the visionary behind “A Gathering Of the Tribes” festival in the USA, which he launched in 1990 with Bill Graham – often seen as the precursor to Lollapalooza, the spirit of AGOTT is very much in keeping with the diverse lineup of Ramblin’ Man Fair itself.

The Cult released classic albums such as “Love”, “Electric” and “Sonic Temple”, and delivered songs such as “Wildflower”, “Love Removal Machine”, “She Sells Sanctuary” and “Fire Woman”. After splitting in the mid 90s the band reformed in the late 90s and released latest studio album “Hidden Cities” in 2016. Ramblin’ Man Fair 2018 will be a UK exclusive performance in 2018 for these British treasures.

GUN (Main Stage) – Drawing influence from the classic rock bands before them Scottish band Gun became one of the UK’s premier rock acts in the 1990s. The bands 1989 debut album, “Taking the World”, led to a host of singles and guest slots with luminaries such as The Rolling Stones, Bon Jovi and Iron Maiden. Following the debut, a plethora of critically acclaimed albums, charted singles and awards, line-up changes eventually led to the bands untimely demise in the late 90s. The band returned in 2008 and have re-established themselves at the top of their game – their 2017 album “Favourite Pleasures” charted in the UK at 2016.  With hits such as “Better Days” and their global hit cover of Cameo’s “Word Up” will be a fantastic addition to the main stage of Ramblin’ Man Fair 2018.

Chas & Dave (Blues Stage) – Ramblin’ Man Fair 2018 are delighted to welcome the living legends that are Chas & Dave. Formed in 1975 the cockney duo invented and perfected the musical genre of rockney. Eight top 40 singles, nine charting albums and countless live shows have followed. The band released their latest studio album, their first in 18 years, in 2013. With hit singles such as “Gertcha”, “Rabbit” and “Ain’t No Pleasing You” The Blues Stage will be a riotous place to be at Ramblin’ Man Fair 2018.


The festival will take place in the beautiful Mote Park in Maidstone, Kent – the garden of England.
Ramblin’ Man Fair will take place on Saturday 30th June and Sunday 1st July 2018.
Announced acts to date are: 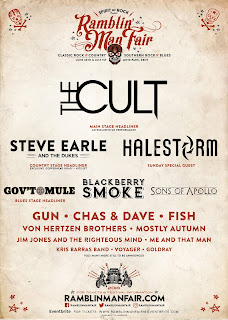