DOOM and delicacy are in the metal world the equivalent of an oxymoron. They shouldn't sit together, let alone be consigned to any recording. But as all who really appreciate music the progenitors of doom were aware of the need for light amidst the unrelenting darkness.

Nottingham act Twilight's Embrace seem to be instinctively aware that this was something their influencers took on board. And, on the EP 'Penance' there is just enough light to expose the shadows.

The three original songs here have a depth of arrangement and melodic melancholy that are blackly enchanting. 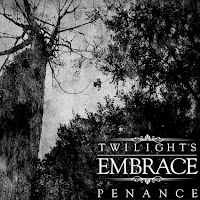 Wearing their influences proudly on their sleeves 'Curtain Call' may have echoes of Primordial, but Twilight's Embrace have enough smarts to give moments of space for the song to breathe, time to reflection.

The same goes for the title track when around three minutes in self-reflection gives listener and band time to really think before an insistent riff propels the tune along.

While many will point to the influences and similarities 'Penance' has enough about itself to showcase a band that swallowed those up, digested them and regurgitated them with a unique stamp.

Opener 'Dying Earth' has more understanding of dynamics than more well known bands, while the closing of 'Penance' has just the right amount of pace.

Deciding to choose Paradise Lost's 'It's Too Late' as a final track for this EP is, however, questionable. True, to an extent they have resurrected the song, but this could have been an opportunity to hear more Twilight's Embrace original material. Perhaps one that could have been reserved for live outings.

Having said that the sensibility on display throughout 'Penance' is that of a band that are fans, and a band that wants to explore what they can do.

Penance is released on February 23rd
Posted by Jonny at 9:23 pm