AS if there wasn’t already enough sub genres under the ‘heavy metal’ umbrella, another has been steadily coalescing over the last few years: emocore.

A combination of angsty emo and brutish metalcore, with a predominantly young fanbase, it has been gaining traction in America on the back of the annual Warped Tour and has recently touched base in the UK and further afield as well, with Friday night’s gig in the Oh Yeah centre being a perfect example of this.

With doors opening promptly at 7pm, a crowd of young, excited, black-clad fans eagerly streamed into the venue, the keenest making a beeline for the barrier.

They didn’t have to wait long until opening act Shields took to the stage and kicked off proceedings. Musically, they were fairly standard metalcore - dual vocals, breakdowns aplenty, synchronised headbanging – but, in lead vocalist Joe Edwards, they possess a dynamic secret weapon.

Passionate, wildly enthusiastic, giving his all like he’s headlining Wembley, and with a mane of gorgeously luxurious locks (honestly, it’s quite hypnotic; you can’t look away!), he is clearly a natural born rock star, and raises the band above that slightly generic ‘metalcore’ label to a rather exciting prospect – something their nineteen thousand Facebook followers would attest to.

With the growing crowd nicely warmed up, it was time for LA “sci-fi-post-hardcore” band (so it says in their bio) Set to Stun to take to the stage. Following a cutesy Forties-style intro, they come out all guns blazing and attempt to shake the very foundations of the building.

It becomes immediately apparent that they are a more chaotic, almost punk affair than the previous band; mikes go flying, a speaker is almost instantly blown, and co-vocalist/guitarist Damien Wong piles into the crowd and writhes on the floor several times, crashing into kneecaps and startling and bemusing the young crowd in equal measure.

What also becomes clear is while they may put on a rather aggressive and bolshy performance, musically they are a bit slapdash and sloppy at times; they also seem to be trying a bit too hard to be, well, hard.

When they get it right, they are heavy enough to punch holes in the floor – more of that and less of the in-your-face-ness, please.

By the time headliners Escape the Fate’s intro begins playing, the crowd are more than ready. A huge roar from the tightly packed group in front of the stage – and when opening number ‘This War Is Ours’ rings out, they finally lose their natural teenage reticence and get caught up in the excitement.

Having been a touring band for over twelve years, and honing their craft at several of the aforementioned Warped Tours, ETF are slick, well-rehearsed and instinctively know what their fans want: huge singalongs, fun between-song banter (with a few swears for naughtiness) and songs they can jump/dance/headbang along to.

Frontman Craig Mabbitt is the consummate professional in this and more, making several people’s night by taking their phone off them to film the band for awhile before handing them back with a smile.

Every song is met with a scream of delight and every word sang back to them passionately, from oldies such as ‘You Are So Beautiful’ and ‘Ashley’ to tracks from latest album ‘I Am Human’ such as the title track and ‘Do You Love Me?’; the latter especially impressive when you consider the album only came out a week ago. There’s also the catchy runaway train of 2015’s ‘Just a Memory’; ‘The Flood’, which gets a huge, shrieky response; all the ‘woah-oh’s and arm-waving of ‘Remember Every Scar’ and a plethora of other favourites which would keep even the most casual ETF fan happy.

They even throw in a spirited cover of My Chemical Romance’s ‘Dead!’, which thrills everyone.

There’s a real sense of affection between the band and their fans: they’ve grown up together, been there for each other through teenage highs and lows, so they hold a special place in each other’s hearts.

It’s very clear to see, and is rather special, creating a positive, welcoming and non-threatening atmosphere: everyone is free to be themselves here tonight. The crowd love it, and the band lap that feeling up; from the delighted grins on their faces, they’re clearly having a ball up there. Mabbitt comments often about how glad they are to have finally made their first trip to Belfast, and compliments the crowds’ singing.

By the time they play their encore, the ‘We Will Rock You’- esque ‘One For the Money’, with it’s “choose your fate” chant, it’s impossible to tell who is more sweaty, swaying and ecstatic: the band or the fans.

Mabbitt signs off with a cheery “Belfast, we’ll see you next time!” and they depart, assured in the knowledge that everyone in the room had a great time.

All around the room people are laughing, crying, hoarse from singing and high on excitement and emotion: and that folks, is emocore in a nutshell. 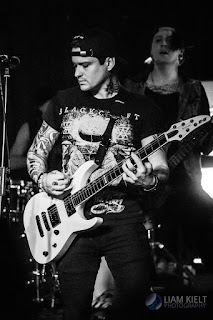 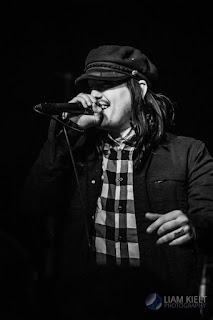 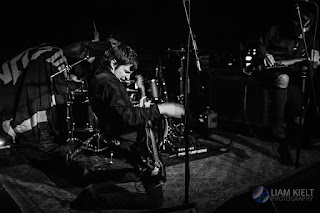 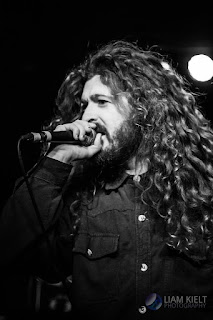