IT has been all change on the Thundermother front as three quarters of the band were replaced, with only Filippa Nassil remaining. Has that diminished in any way from the band? Not at fucking at all.

If there was any doubt about the new re-purposed rockers this self-titled third album kicks that into touch. 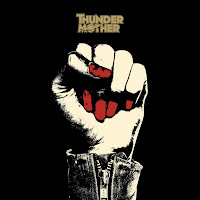 The 13 track are straightforward no nonsense rock - all instant classics. Recording them in  a remarkable 10-day period live gives it an organic urgency, such as on the frenetic 'Racing on Main Street'.

There are no weak tracks here, from the moody opener 'Revival' to closer 'Won't Back Down'. Indeed that seems to be the musical and lyrical message - Thundermother are back to stay.

It's not however all finger in the air rocking out. 'Fire In the Rain' is a brooding ballad that builds to a chorus that is sublime.

Guernica Mancini does have similarities to her predecessor, but there is no imitation here, putting her own stamp on TM. The extremely catchy 'Hanging At My Door' is a perfect example of this, merged with a meaty riff.

New drummer Emlee Johannson and bassist Sara Pettersson have a relaxed but purposeful groove throughout, highlighted on 'The Original Sin'. Throughout drum sound in particular is impeccable.

There appears to be an under-current on 'Thundermother', about proving themselves, about re-birth and the usual "fuck you" attitude.

Sure, some tracks do pay homage to their influences (the bell and opening of 'We Fight For Rock N Roll' sounds like a sequel to DC's Rock N Roll Ain't Noise Pollution) but the  four-piece are much more than another hard rock band playing out clichés.

Instead they put their own stamp on hard rock. Take a pinch of Aussie rock, add 70s sounds, a dash of European classic rock and this Stockholm band have nailed it.

Even after repeated listens it still sounds fresh and vibrant.

Review by Jonathan Traynor
Posted by Jonny at 3:01 pm