PUNK singers: hard, wiry, lairy blokes who hiss and spit about how effed up the world is and would headbutt you as soon as look at you, right? Think the Sex Pistols, Poly Styrene, and every studded jacket-clad punk you ever saw at a gig.

But what if there was a new kind of punk rocker: one who opens up about how tough life is; who is still full of fury at the state of the world circa 2018 but can also fill a show with light-hearted banter and self-deprecating humour? Enter one Frank Carter.

Beginning his musical career in one of Britain’s great punk acts, Gallows, Carter left to pursue a more classic rock-oriented sound with Pure Love. When that sadly fell through, he returned to his punk roots, starting up Frank Carter and the Rattlesnakes so quietly that he took everyone by surprise when he announced it on Twitter. 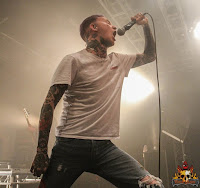 Album Blossom followed rapidly; a blazing, rage-filled, instant punk classic, it was gleefully seized upon by both fans and critics. Then followed something of a surprising turn: second album Modern Ruin, which toned down the anger and instead spoke of Carter’s somewhat more settled life with his wife and young daughter.

If you were worried that he had lost his edge and become ‘soft’, however, a FC&TR gig will put that thought to bed rather smartly, as a crowded Mandela Hall was to discover on Sunday night.

First, though, opening act Chinese Newspaper had the rather unenviable task of warming up the still-filling room. They describe themselves as “fuzz pop”, which turns out to mean perky, sunny indie rock with a dash of pop-punk thrown in – indeed, their youthfulness and baseball caps gives that away before they play a note.

With thick Irish accents, well crafted songs and some welcome moments of heaviness preventing them from being saccharine, they may play to a half full room, but those present seem to enjoy them very much. 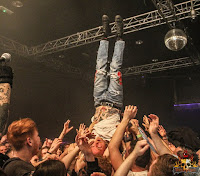 Next up was the unusually named DMOB HAPPY who stride onstage clad in (matching) blazers and, following a blare of distortion, further warm the crowd up with their Nineties-influenced sound and melodic vocals. They’re sort of “Oasis meets the Beatles” schtick – the singer even looks like John Lennon, and if he doesn’t worship him a tiny bit it would be very surprising – combined with the fuzziness and trippy vibe of The Doors goes down well.

Speaking of distortion…half an hour later, the house lights drop and a wildly distorted bass guitar intro rings out, causing the crowd to roar with anticipation – a sound that only gets louder as the man of the hour himself saunters onstage. With a delighted grin and a bellow of “Belfaaaaaaaaaast!” he immediately switches to his manic, high-energy stage persona.
Opening single ‘Primary Explosive’ quickly segues into the sexy, shouty ‘Fangs’, prompting the first delirious singalong of the night. Without a moment’s pause they fire straight into their first single ‘Juggernaut’, during which Carter leaps into the crowd and shows off his latest party trick: standing on the crowd’s hands, in a headstand, still singing. Impressive! 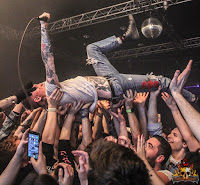 A brief moment of calm follows, during which he apologises for having to postpone their two Irish dates due to illness. The band then launch into the first track from Modern Ruin, ‘Vampires’, which proves to be a bit more of a hip-swinger than a headbanger, as do the next two tracks, ‘Wild Flowers’ and slinky recent single ‘Spray Paint Love’. It has to be said though, at no point does the explosive energy in the room dip in the slightest; in fact, during ‘Wildflowers’ there is a distinct shift upwards as Carter informs the crowd that women put up with a lot of shit in their lives and that only they were allowed to crowd surf during said song.

Throughout, Carter is bolshy, charismatic - and, it has to be said, terrifically funny: clambering into the crowd because “I wanna dance”, stopping ‘Jackals’ to inform the crowd that they all have to sing ‘happy birthday’ to someone named Charlotte (which they obligingly do), and at one stage taking someone’s phone off them and calling their mother because they cheekily asked him, clearly not expecting him to! It’s as brilliant as it is unexpected.

There are some serious moments too: his emotional discourse on why he wrote ‘Loss’, followed by a stripped back version with him silhouetted against a blue light and a cloud of dry ice; and dedicating the furious ‘Paradise’ to those who had lost their lives at gigs such as the Bataclan in France, which earns him a heartfelt, sombre round of applause.

A four-song encore begins with ‘Devil Inside Me’, during which the pit opens up spontaneously. Carter then announces that nobody else should crowd surf as he is worried about the young girls at the barrier – and also, he quips, because he “saw someone’s butt crack, which ruined my night”! ‘Snake Eyes’ and ‘Lullabye’ then follow, and then it’s time for their now-traditional closing track ‘I Hate You’, which prompts another huge singalong with the crowd, much to everyone’s delight.

That’s Frank Carter in 2018: no hair dye, fancy Gucci suits or gimmicks: just him, his band, and a new sense of calm, despite the rage. Funny in ways you would never expect if you had only seen him in Gallows or listened to Blossom, clearly loving getting older despite the gripes about his hearing and his back and so on, and, well, simply a punk rocker, he proves in spades that he is still carrying the punk flag high and proud. 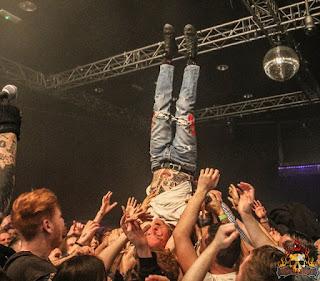 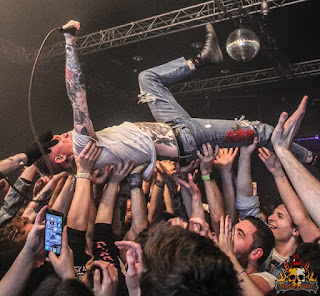 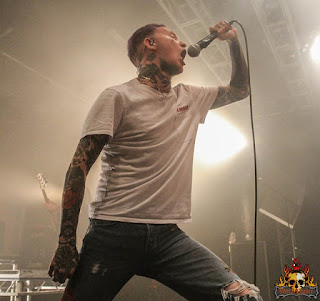