ALBUM REVIEW: Visigoth vapourise all as they pledge the Conqueror's Oath

PO-FACED, overly analytical metal fans look away now. Those with a sense of humour, who enjoy heavy metal for heavy metal's sake keep reading, because Visigoth have returned to claim their rightful place in the panoply of 21st Century great metal acts.

As with the 2015 release, 'The Revenant King' the Salt Lake City five-piece have stayed true to their vision of straight-forward, heads down metal on 'Conqueror's Oath'...with only one minor deviation. 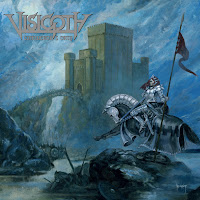 From the off you know what you get as 'Steel and Silver' riffs kick straight out of the blocks, sprinting around your head against fantastical lyrical themes.

And, those lyrical themes cause those who take their metal a little to serious be put off. They can either fuck off or like the rest of us get our air guitar out and run around the room like a toddler pumped full of E numbers.

'Outlive Them All' is, for example, a supercharged, full throttle, adrenaline four-and-a-half minutes of sheer delight. Rampaging, roaring music that will give you neck ache.

The sense of 'epic' that pervades most of 'Conqueror's Oath' gives it all a sense of purpose. Hell, it is almost as if Visigoth have listened to all of the Friday Rock Show recording between 1980 and 1985. Oozing through their pores is a sense of the delight of NWOBHM with liberal dashes of Manowar and lyrics akin to Blue Oyster Cult.

And, there is nothing wrong with that.

The title track and 'Warrior Queen' are glorious. Sweeping in scope, taut in intent they are the sort of songs that will be as sublime live as they are on the album.

However, there is a deviation... 'Salt City'. As if they have sucked the last remaining souls of Kiss, took all of Ace Frehley's licks and re-located them to Utah. Just a great deviation from the fantasy.

Visigoth are a band that have been 'bubbling under' for many in the UK and Europe, but if you love your straight-forward heavy metal Conqueror's Oath needs to be added to your collection.

It's an album that will have you in parts grinning like a maniac at one moment and tight-jawed hair flailing the next.


Conqueror's Oath is out on Metal Blade on 9th February 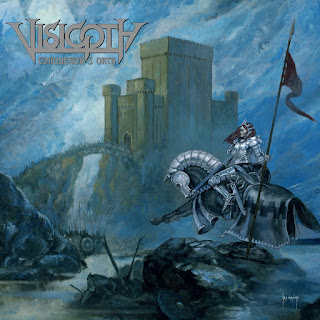