REMEMBER Sonic Syndicate? They were the band from Sweden that scored success with their take on melodic death metal, with a smidge of metalcore and industrial metal thrown into the mix for several albums under the Nuclear Blast label.

Come 2014 they released their self-titled album and thereafter NB dropped them. Come 2016 they are now signed to Despotz Records and are set to release their latest album 'Confessions'.

And before you grab your battle jacket, your bullet belt and faded jeans wait a doggone minute. We were in the exact same mode and then the title track kicked off with keyboards, melodies and nary a geetar riff to be seen as Nathan sings like he was starring in a fucking X-Factor episode. 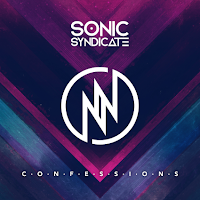 What in the name of all the metallic elements of the Periodic Table is going on here. Where did the metal go? Have Sonic Syndicate lost their balls? Are they desperate for some chart action? Are they doing the wrong sort of drugs? Have they lost their passion for beer?

Truth be told we hated this new release on first listen. But - and it is a big but - if you take this as a standalone release there is some merit in the album, and some absolute howlers that are truly awful.

This is a rock album, not a metal album, but tracks such as 'Falling' and the title track should be consigned to whatever hell there is for pop and hip-hop. Sure, adding a guitar riff may make it skirt on the edges of rock, but they deserve to be skipped well over. and do not go near 'Sill Believe' should be avoided at all costs as the saccharine levels may make you become instantly a Type Two Diabetic.

However, don't dismiss this release out of hand. There is some meat here. 'I Like It Rough' is a really solid, enjoyable slab of hard rock. At the same time 'Cyrstallize has a rock sensibility in the riffing, and a key and melody line that is deserving of repeated listens, just dump the synth drums...

What is clear is that Robin (guitars, programming, keys) and Nathan (vocals) have really taken a good long look at what they want to do and play. Sure the heaviness is still evident at times, but this is a rock/pop release that we suspect Mutt Lange and Def Leppard and their ilk may have a close listen and Jim Steinman may pinch a melody or three.

'Life is Not A Map' is a great commercial track, 'Closure' is the sort of track Nickleback wished they'd written and boy vands
Posted by Jonny at 9:20 am