WHEN it comes to progressive metal many of the casual fans of metal jump straight to Dream Theatre. And, there is nothing wrong with that. But if you want to delve deeper; to coin a phrase to jump down the rabbit hole then the default band to go to is Meshuggah.

For the past 30 years they have pushed the boundaries with a level of complexity that startle and confound in equal measure. They also release albums that can sometimes take the listener half a dozen or more play throughs before the seemingly impenetrable becomes clear.

New release 'The Violent Sleep of Reason' is no different, except it is perhaps Meshuggah's best release for some years with an almost organic sound, compared to some of the more 'sterile' digital aural tracks that have come before. 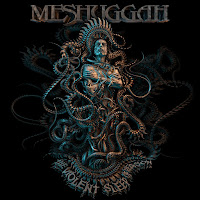 It sounds like a proper studio album, rather than something over-engineered and full of post-production.

'Violent Sleep of Reason' is a challenging vision of extreme metal. From the opener 'Clockworks' - which clocks in at more than seven minutes - they do not put a foot wrong.

Lyrically they take on deep issues, such as on the title track, based on of all things a Goya painting, and reflects on what can happen society turns a blind eye to what is going on. The painting is called 'The Sleep of Reason Brings Forth Monsters' so you can guess this ain't no "boy meets girl" shit.

While Jens' voice has the same sort of intensity you would expect from any Meshuggah release, and Tomas and Dick shift paces and rhythm signatures continuously, especially on the likes of 'Nostrum'.

Indeed 'Nostrum' highlights all the strong points that can be found elsewhere on the release. Shifting times, atonal guitar married with rip-roaring riffing from Martin and Frederick are stars throughout.

This is a release heavy in intent and heavy in concept, musically and lyrically. And, some of the material is definitely a sound that will resonate, something that may be because the band took more time to rehearse the tracks before going into the studio.

Thomas explained some of what they wanted.

"It’s old school; the methodology is similar to what metal bands were doing in the ‘80s and 90s," he said. "And that vibrancy comes out; it’s a very audible difference, sloppier if you will, but at the same time it brings an energy that I personally feel was lacking over the last few albums. They were too perfect - this is less perfect, but in that sense, more alive.”

Whether intentional or not, this makes the album 'swing'. In between all the intense shifts, roars and movements this feels alive and potent. The guitar sounds are not identikit extreme, nor are they predictable.

While many may disagree it could be that Meshuggah have perhaps managed to release their best album to date. As 'Violent Sleep of Reason' concludes with the wonderful 'Into Decay' you feel washed of the sins of complacency, the strife of everyday first world worries...and then you hit the button to listen to it all again.

Review by Jonny
Posted by Jonny at 3:30 pm