SONATA Arctica are one of the bands that get slotted into the genre of power metal, but over their past two or three releases they explored some more progressive elements to their sound, a little like label mates Nightwish, always trying to re-invent themselves without straying too far from the path.

On 'The Ninth Hour' Sonata Arctica have managed to walk that tightrope, with an album for diehard fans and those only now coming across their symphonic power.

It is also one of the more "serious" offerings from the band, with some darker lyrical themes laced around the tremendous sounds. 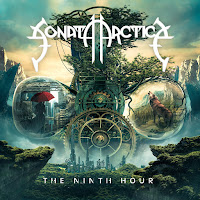 Within the tracks there is everything from the singalong 'Fairytale' through to the more downbeat ballad like 'We Are What We Are'.

However, the riffage is there on the likes of 'Rise A Night'.

All of this begs the question as to whether this is an album of split identities? Some of the contrasts are extreme - the 10-minute plus epic 'White Pearl, Black Oceans PtII - By the Grace of the Ocean' might seem at odds with the romp of 'Till Death's Done Us Apart', but taken in totality it holds together well.

As always Tony's vocals and keyboards carry the songs along, and an honourable mention must also go to Henrik's keyboard parts too. They all play important parts without distracting from the basic metal template.

Produced by the band themselves, the mix by Pasi Kauppinen keeps that balance in the sound.

And that is the key word here 'balance'. Sonata Arctica have drawn from their earliest influences, taken lessons from their most recent releases and delivered an album that is deserving of continuous listens.