To get everyone up to speed, Red Fang are a US rock band that have been on the scene since about 2005 and since the release of the first album it’s been all about no-nonsense rock. ‘Only Ghosts’ is no different.

It’s ten solid tracks of sludge or stoner rock depending on which part of the world you come from as it’s a moot point otherwise. There was a point back in 2014 when the album, ‘Whales and Leeches’ caught the imagination and I found myself watching these guys on the Letterman show. Of all places, the Letterman show, but it told us the band had arrived and that the average guy was looking for simple, straight up rock without all of the shenanigans. ‘Only Ghosts’ continues that tradition.

Before we get into the album the cover is a hark back to the day when the art told you something about the band, confirmed the purchase and gave hours of entertainment pouring over the liner notes.
This cover is an optical illusion that gives you the impression that the art work is slithering across the page towards the red ball in the centre. Just the tonic for coming home after a big night, fighting the room spins and then being taunted by an album cover.

Anyway, the music is as immense as Red Fang always sounds. There is no trickery in the mix and it’s just a huge solid sound from the four piece. Bryan Giles on vocals is perfect for the band and this album is a headlong rush from beginning to end. Kicking off with, ‘Flies’ it’s a no-holds-barred rock out, simple straight up melody but still unpredictable. ‘Cut it Short’ is up the stoner end of the spectrum and it’s another solid, unpretentious track that bookends into, ‘Flames’, a ninety-second instrumental, all chimes and feedback.

As long as I’ve listened to this band I’ve always been happiest when they just sway all over the place, changing time and throwing everything into the mix. Just listen to track four, ‘No Air’, and you will get my drift. Its riffing, its sludge, its stoner then it all grinds to a blurry halt. Need a quick introduction to Red Fang, then drop the digital needle onto this track and strap yourself in.

Pick of the bunch is track seven, ‘The Smell of the Sound’ which is feed 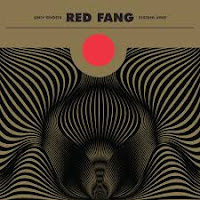 back where a riff should be, all running through a go-stop-go beat that danced my speakers across the desk. This is the gut wrenching, internal organ reorganisation that trademarks Red Fang.

Not one dud on this album, we close the show with, ‘Living in Lye’, with its syrup thick riffs and insane drumming to the end. The solo here is beamed from another era and hints at the direction that this band is heading. As the song closes, it kicks on again with the solo jostling to be heard during the fade out.

I think that Red Fang could sing a dictionary and I’d still go to see them. Word to the wise, get this on vinyl if you can as it adds a whole new dimension to the sound. Digital is great but vinyl lets this music breathe. Get it, stare and the cover and get sucked into the Red Fang universe.

Review by Craig Grant
Posted by Jonny at 10:50 am