HARD Rock Hell -  a name familiar to all in the UK and further afield for putting on fantastic festivals across the UK and Europe. But when they decided to branch out to host a two-day festival in Sheffield's O2 Academy entitled 'HRH: Doom vs Stoner' no-one really knew if it would be a success.

It was. A resounding success.

Down-tuned instruments blasted the venue, registering on the Richter Scale. There were more grooves than a warehouse of vinyl records. The volume was set to pulverise internal organs. And beer flowed like a flash flood after a thunderstorm.

A total of 23 bands, across two stages performed with aplomb. The audience roared, applauded, drank and on occasion moshed.

The bastard sons of Sabbath assembled and played hour after hour of glorious musical excess. Whether it was slab like groove of Orange Goblin, or the strangeness of Drugunaut; the classic sound of Angelwitch or the force of Raging Speedhorn; or the American sound of Electric Citizen there was not a foot put wrong by any act.

All the interpretations of the doom and stoner vibes were on display. For many the only downside was the fact that some acts over-lapped with others, but such is the travails of any festival goer, one that cannot be avoided.

While reviews of Day One and Day Two will follow, you only need to know one thing about October 1st and 2nd - when the fact that the same event is taking place next year tickets were already being bought in fistfuls before a single act has been announced.

That was not just because fans of the genre, it is because it was well organised, friendly for all the ferocity on stage, and with no incidents to speak of that would mar other festivals. And, they even had vendors selling food...the burgers, chips, wraps and bags of cocktail sausages kept many sustained as they prepared for more aural ravaging.  But above all, the sense of community was palpable and something to be savoured. 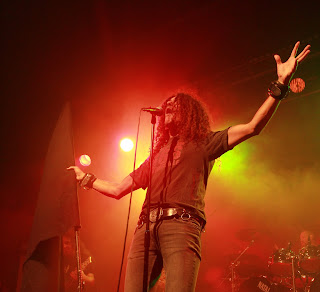