MENTION the name Hardline and you automatically think of their seminal debut album Double Eclipse and the huge impact it had on the melodic AOR genre, in particular the introduction of the then relatively unknown singer Johnny Gioelli.


The press blurb claims the album is the heaviest Hardline album since ‘Double Eclipse’, but is it?
It kicks off with the bright and punchy rocker that is ‘Where do we go from Here?’  A song with guitar and slightly proggy keyboard lead in which develops into a relatively uptempo number with good background vocals and a sweet solo from Ramos. Decent start. 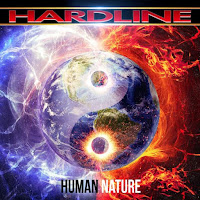 ‘Nobody’s Fool’ follows with an indeed slightly heavier guitar sound. Fans of Hardline will hear a bit of a throwback to the original sound, which had a hint of Journey to it because of Neal Schon, but with a more up to date sound and production.


Title track ‘Human Nature’ is up next. A power ballad with a piano and classical guitar intro that develops into an anthemic  song with a powerful chorus and a lower register vocal delivery from Gioelli. It’s rounded off with a solo Schon himself would’ve been proud of.


The down’n’dirty blues riff and groove of ‘Trapped in Muddy Waters’ is a song that develops into a tune that combines mellow and hard rock riffs in equal measure. Gioelli delivers a very soulful vocal and the solo from Ramos starts in the same manner before he unleashes a fine piece of shredding that still fits the structure of the song.


‘Running on Empty’ has a slightly heavier feel to it and is very reminiscent of “Rhythm From a Red Car” from ‘Double Eclipse’.  The drum and bass lines are steady and help drive the song along nicely.


‘The World is Falling Down’ has an uptempo riff with a slightly heavier feel again and is quite similar in structure to ‘Nobody’s Fool’. Another example of melodic AOR at its finest.


The highlight of the album is the wonderfully powerful and evocative ballad ‘Take You Home’. A simple song in structure featuring only Del Vecchio on piano and Gioelli’s powerhouse vocals. A mushy song, according to the band, “about the emotions that can break people apart, and the ones that can bring them together”


The next two songs, ‘Where The North Wind Blows’ and ‘In The Dead of The Night’ have a European feel to them, probably influenced by Gioelli’s time with Axel Rudi Pell. Strong rhythm sections, keyboard backlines and faster paced driving riffs are to the fore giving them a more hard rock feel. The background vocals and guitar solos are top notch and Gioelli gets to flex his vocal muscles, especially on In The Dead of The Night.


The 10th track on this 11 track album is “United We Stand”. A laid back, moody number with some nice atmospheric guitar work. Again the somewhat proggy keyboards are in evidence and there is, a heavier section around the guitar solo.


Finishing the album off is ‘Fighting The Battle’. A hard rock riff and steady rhythm section drive the song along nicely with subtle keyboards under the main section. Again this song switches moods but still rocks and had a feel good factor to it. Another song with an anthemic feel to it and a very strong finish to the album.


So, does the album deliver the heavier sound it claims to? The use of the word heavy can be dangerous at it gives the listener a pre-conceived image of what it will sound like. ‘Human Nature’ is not heavy but it is a very decent piece of modern AOR and with bigger production is certainly more in your face than Double Eclipse but it needs to be judged on its own merits and not compared. From that point of view it is well worth a listen and added to your collection.
Review by Andy Gillen< /u>
Posted by Jonny at 11:10 am