EP REVIEW: Cursed Sun realise their potential and rise to pummelling new heights on The Amygdala

WHEN you name your EP after two parts of the brain that are at the core of memory, decision-making and emotions you are taking a 'cerebral' risk with your music and lyrics, but Cursed Sun have always been ones not to rest on the proverbial laurels both on recorded material and on stage.

The EP bears the title 'The Amygdala' and within its four-tracks are a forceful dynamic musically and a dystopian vision of where humanity rests right now in the second decade of the 21st Century.

Throughout they showcase talent and a terrifying amount of ability to translate their aspirations. 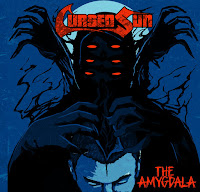 Composition and arrangements have been elevated on this release and from the opening bars of 'Breeding through Bleeding' to the end of 'Primordial Chaos' there is a sense of urgency as if Cursed Sun not only want you to hear these songs, but need you to listen.

The opener follows tried and tested territory for the band, but with a better sense of what they have always intended for their contemporary metal, taking from history and adding what the best of 2016 can bring to the table.

On 'Cataclysmic Decline' more subtle touches come in, with some great work from Jonny's solos adding to Jonesy's altering of styles and anguished vocal conclusion.

But it is the title track that is a stunner. There is more restraint, yet greater power. Horrific lyrical content is matched well with a sense of a band painting a musical landscape that allows you to immerse yourself as a listener. Ciaran, Chris and Monty pace out the arrangement for Jonesy's styling and Jonny lays down some sweet, lyrical guitar work to overlay the pain of the song's message. 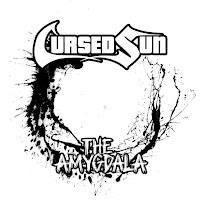 'Primordial Chaos' has a romp and a roll, groove embedded into the essence of the track. The "darkness is my throne" twisted into "the darkness is in control" as the riffs propel the song to a manic declaration of malevolent paths where nothing can stand in its path.

What Cursed Sun have done here is compact their year's of experience, gigging and recording throughout Northern Ireland into a stunning release that is compelling and draws you inexorably in.

Repeated listens open new vistas within the release, vistas that will draw you back to dark places, leaving you to contemplate the terror and reflect on the best of the metal mangle that Cursed Sun put you through, yet...you go back again. 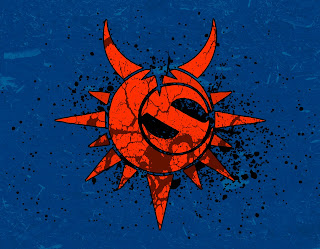 Email ThisBlogThis!Share to TwitterShare to FacebookShare to Pinterest
Labels: Cursed Sun, The Amygdala