THE Stranglers will headline Belfast show at the Ulster Hall, Belfast with very special guests Therapy? on Saturday 03rd March 2018.

And, for those who saw them with SLF earlier in the summer at Custom House Square show know this will be a special show.

The Stranglers are one of the most continuously successful bands to have emerged from the UK punk rock scene. Expect to hear hits such as Golden Brown, No More Heroes, Peaches and Always the Sun and more recent tracks.

Headed up by Sunderland-born singer Baz Warne, the tour is set to coincide with the planned re-release of their first seven albums (six studio and one live) originally issued on the UA and EMI/Liberty labels.

For the 2018 UK tour, Therapy? will be their special guests.

The group are expecting to release their 15th album in early 2018 and have spent much of the past year performing a series of critically-acclaimed acoustic dates. 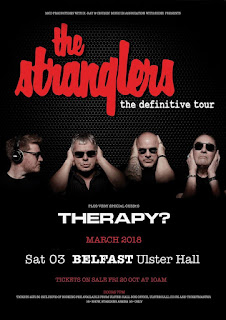