ON what may become known as Ophelia Eve, a storm of a different kind arrived in Belfast’s Limelight and played like it was their last night on Earth.

The night began with Cork three piece ‘Mindriot’. The room was already full when they kicked things off. The lads even managed to get the punters chanting along. They made the most of their little sliver of stage and warmed the crowd up considerably for the impending storm, even if lead vocalist Tony’s banter between songs was difficult to comprehend; a combination of a heavy bass and an even heavier accent! 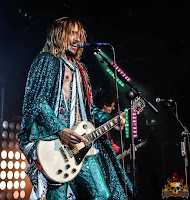 After a small break, The Darkness walked on stage after a oddly suitable Scottish themed intro. Lead singer Justin Hawkins looked like a prize fighter in his signature green cape, ready to do battle with the audience.

Opening with the fast paced ‘Open Fire’ it was easy to see who would win this fight. They had already landed a knockout. The opening salvo wasn’t without a few little wrinkles however. From the floor it was hard to hear the vocals. Justin could be seen trying to indicate to the sound desk that he couldn’t hear himself. This did little to dampen the already electric evening in the Ormeau Road venue however as the band quickly followed up with the classic ‘Love Is Only A Feeling’. They had the Limelight on the ropes, their hands swaying in ecstatic submission.

The band’s overt dig at the train network ‘Southern Trains’ marked the removal of the cape, revealing Justin’s trademark green catsuit. Was the green for Ireland perhaps? The sound problems persisted for Justin through the next song ‘Black Shuck’ but at this point it seemed to have been sorted out for the audience.

‘Buccaneers of Hispaniola’, another song off their new album ‘Pinewood Smile’, saw the band demonstrate a new, heavier sound. Drummer Rufus Tiger Taylor, son of Queen legend Roger Taylor, has brought a new flavour to the band. His flamboyant drumming style is pushed to the fore on their latest album and was in full flow during their live set. He is a perfect fit for the band who have admitted that they didn’t quite click with their previous drummer, Emily Dolan Davies.

At this point the party was in full swing with a member of the audience offering Justin her bra during ‘All The Pretty Girls’ which he happily wore on his back and found it’s way into Justin’s crotch for the next song ‘Barbarian’. Whether she decides to wash it or not is anyone’s guess!

In between songs Justin was determined to get the crowd singing along to a mysterious song with ‘Belfast! Belfast!’ as part of the lyrics. It was only later when Justin asked someone to look the song up on Spotify that it was revealed to be a Boney M song. A strange choice but one that Justin seemed to champion.

Proceedings slowed down as Justin sang the first cover of the night ‘I Should Have Known Better’ by Jim Diamond. A very left field choice for cover but it really worked, with the eager Limelight faithful chanting along to the song’s famously catchy chorus. This was quickly followed up by the wonderfully tongue in cheek tune ‘Why Don’t The Beautiful Cry?’ with Justin on an almost inaudible piano.

After confessing to a bum note (no one noticed) during ‘Dancing On A Friday Night’ Justin revealed that his ear had just popped and he could hear everything perfectly; he put the earlier audio issues down to an afternoon Apple crumble followed by a snooze.

The Darkness continued a triumphant night with a string of knockout hits including  ‘Happiness’, ‘Every Inch Of You’ and the crowd sing-along favorite so far ‘Solid Gold’. After pulling off an impressive hand-stand and crowd swimming during ‘Get Your Hands Off My Woman’, they brought the evening to the first encore with ‘Growing On Me’ which could barely be heard over the Limelight crowd who sang as one heaving mass.

After a brief encore, The Darkness closed the night with the incredibly heavy ‘Japanese Prisoner Of Love’ and, in a surprise to no one, finished with ‘I Believe In A Thing Called Love’, with every member of the audience singing every word.

At the start of the night Justin had challenged the audience to be better than Dublin where they had played the night before. There was no doubt on anyone’s mind, much less the band’s, that Dublin was relegated to second place. To save hurricane Ophelia the trouble, The Darkness tore the roof off the Limelight. 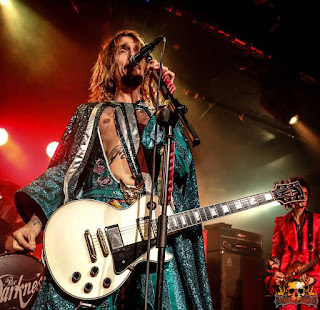 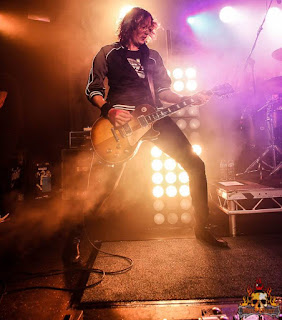 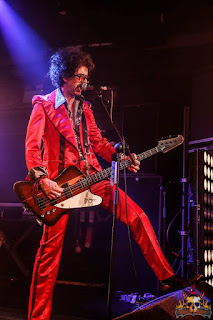 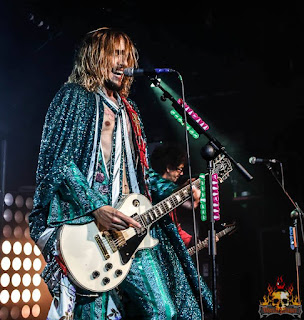