ALBUM REVIEW: Annihilator's 16th release For The Demented may be their best yet

ANYONE who witnessed Annihilator at Bloodstock 2017 knows what a special (and humourous) band they are. But while all fans harken back to the days of 'Alice in Hell' and 'Never, Neverland' there has been a development in what Waters and co have delivered.

Everyone expects a high standard from Annihilator, but with the November 3rd release of 'For The Demented' they have taken the bar, stuck it up the ass of any doubters higher than anyone could expect. 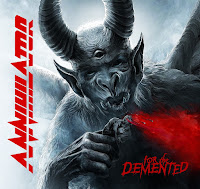 In one sense this is an album that harkens back to the so-called glory days: but in another sense feels fresher, vibrant an alive.

Sure, the hats are tipped to the 'classic' Annihilator style, and their familiar influences touchstones (one direct word lift from 'Tallica - spot it youself!) but this is a collection of 10 tracks that deserve to be savoured.

From the headlong race of opener 'Twisted Lobotomy' to the weird jazz shit on closer 'Not All There' this is a release to revel in.

But those expecting the classic thrash themes it is also a collection to delve much deeper into, in terms of the music and lyrics.

Waters has confessed that he has moved from his insular writing process - when we interviewed him a few years back he talked about sitting with software listening to drum sounds to get what he wanted. Taken away from the self-imposed confines and having bassist Rich Hinks Annihilator have risen to another level.

Sure, the melodic shredding on the likes of  'One For The Kill' and 'Altering the Altar' - as well on every song - is exemplary, but it feels like it is better balanced out within the arrangements.

The title tracks is a perfect example of this, from its brooding introduction to an almost atonal riff and deliberately forced melodies it pushes thrash to its musical limits, but still has moments that stun.

For those of a certain vintage 'Pieces Of You' would sit as the last track on side one of some vinyl  Metallica releases, but takes that 'model' and develops it with soulful playing overlaid with dark. cannibalistic lyrics (apparently mayonnaise, pepper and a little salt work well...)

And, here within lies the secret of why Annihialtor stand above many - their dark Canuck humour and adaptability sees them above many pretenders. They are the genuine article.

'The Demon You Know' out-Musataines Mustaine's Peace Sells with a knowing nod and a twisted smile.

Many will comment that this is a little derivative, but sit them down - fuck it tie them down - and make them listen to 'For The Demented' until they 'get it'.

What Annihilator have produced is a unique product, something that gives thrash (and indeed NWOBHM fans) a glimpse into the  days when music excited, and brings a collection of songs that still feel fresh.

Waters has achieved much on this - and by the Lord Baphomet there are so-called hard rock/sleaze bands that would sell their soul, clothes and drugs to have written and recorded 'The Way'.

Does all this seem to effusive? Frankly we don't care, because this is the real deal in terms of a metal record - no flummery, no fancy OTT shit and a deep lyrical thematic.

We perhaps could have done without the atmospheric instrumental 'The Dark' this is an otherwise flawless Annihilator release.

And, even before we hear these songs live the hairs on the back of our necks are standing rigid in anticipation. 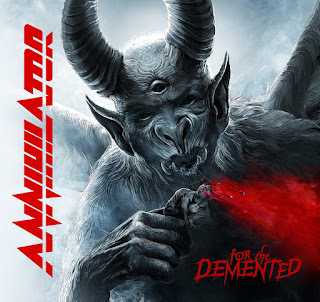