NEWS: Bloodstock ups the ante with three stellar acts in the metal universe

PEOPLE got excited and a little bit overcome when Bloodstock announced Judas Priest as the Friday night headliner, but today's announcement saw thousands swoon in delight.

Yep, added to the bill are Emperor, Devildriver and Nails. Geologists across Derbyshire are warning of earthquakes and the possible tilt of the earth's axis with the addition of these three.

Emperor fans have had to be revived after they learned that the legendary act will be playing 'Anthems To The Weilkin At Dusk' in its entirety.

Frontman Ihsahn confirmed they’ll be performing a special set based around it.  “We're finally bringing the 20th Anniversary show for ‘Anthems to the Welkin at Dusk’ to the UK," he said  "We’ll be performing the album in its entirety and look forward to celebrating with everyone at Bloodstock!”

With Devildriver on the bill we humbly suggest that from now until August you get yourself circle fit....

Dez Fafara said: "Devildriver is playing Bloodstock in 2018 and we couldn’t be more fucking ready to bring the heavy and get the whole festival moving!

"We are thankful for the opportunity and can’t wait to see everyone there!  Get ready to get the fuck in the pit!”

Keeping the heavy theme three piece Nails will be throttling the fuck out of Catton Park.

Todd Jones said: “I've been following Bloodstock and looking at their advertisements online for the past few years, admiring how great a job the festival does having a great mix of underground bands and some of metal's biggest and finest.

"We're proud to finally say we're part of what Bloodstock is doing to fight the good fight!  We'll see all you motherfuckers at Bloodstock!!!"

With Gojira and Nightwish (fuck up haters, there'll be something in the Sophie Lancaster stage for you) we only eagerly await the confirmation of Toto as Thursday night headliners :)

And, if you haven't got your tickets yet what the fuck are you waiting for? 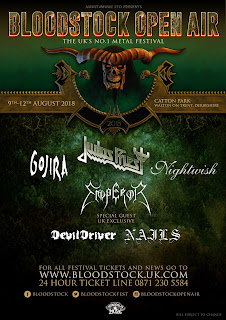