WITH an ever-growing fanbase, and many loyal devotees here in Northern Ireland we're pleased that Massive Wagons are taking the next step in their career by signing a worldwide deal with Earache Records.

Formed in Lancashire by brothers Adam (guitar) and Alex (drums) Thistlethwaite, both in their 20s, MW are the newest rock 'n' roll hopefuls to sign to Earache.  Rounded out by Barry "Baz" Mills (vocals) and Adam Bouskill (bass), and as the press release says Massve Wagons "play straight-up, feel-good rock 'n' roll in the English tradition - no gimmicks, no agenda."

The band have been nurtured and developed by Off Yer Rocka for several years - and have expressed their thanks to the label for enabling them to develop to this point in their rock 'n' roll journey.

And, good news for fans is that Massive Wagons hope to release their latest album early in 2018

"You always hear people talk about 'making it'; rock fans chatting about who they think will 'make it' or who they'd like to see 'make it'," said frontman Baz.

"I've never really known what that truly means to be honest - I suppose everyone has a different take on what it means to them - but if you ask me, I'd say 'making it' means being lucky enough to reach a platform where our music is taken seriously, recognised and respected; where our music will be cemented in history, referenced in the future maybe by our peers as a band that did something; remembered by rock fans.

"I wanna leave a legacy - however big or small that is, I want to leave our mark, and although I want to take this thing much further, I firmly believe through signing with Earache that we have achieved this.

"I'm so proud to sign this deal; to be able to work with such a huge label like Earache is a dream come true.  The new Wagons album is just about written, next is the studio, then the biggest, baddest release yet.  Bring it on!  I just wanna thank the people at Earache for having faith in what we do and giving a group of guys from the street an opportunity to stand out.  Much love and rock on."

"We have always been impressed by their artists and are extremely confident that the best material we're writing has found its rightful home in Earache for many years to come.  We are straining at the leash to get stuck into 2018 and beyond." 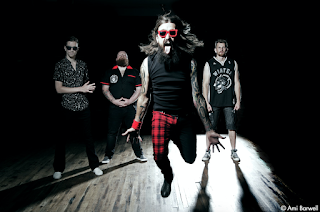