ALBUM REVIEW: French black metallers Aosoth deliver the darkness by the truckload with ‘V: The Inside Scriptures’.

In the now burgeoning French black metal scene it’s hard to stand out from the crowd.

With bands like Blut Aus Nord and Deathspell Omega putting French black metal firmly on the map you have to do something truly special to get yourself noticed.

Parisian chaos demons Aosoth have done just that with ‘V: The Inside Scriptures’, an album overflowing with insane riffs, phenomenal drumming and seriously impressive song writing. 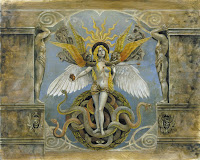 The first track ‘A Heart to Judge’ begins in ferocious style. Double kicks and grinding fretwork will send you into a fit of headbanging as the snarling vocals creep into the mix. The music is raw and dense, the guitars fire out chaos and some seriously catchy riffs as the drums assault you with blastbeats and at times and old school death metal style of drumming. A very strong, very dark opener.

The second track ‘Her Feet Upon the Earth, Blooming the Fruits’ is a cyclone of madness from the word ‘go’. Evil, manic riffs and drumming as heavy as granite smash into each other with force. The vocal work just adds to the nastiness, beating you into the corner with a demonic wall of noise. This one will have you banging your head and hailing the devil all day long.

‘The Inside Scriptures’ starts off with an ominous riff that’ll make you feel more than a little uneasy. The drums come crashing down and the bass rumbles along creating a sinister sound which the rasping vocals fit perfectly. Dissonant riffs and blastbeats soon pick up the pace. There are some absolutely filthy riffs in this one.

The nastiness oozes out of this song like an infected wound.

‘Premises of a Miracle’ is up next, and it doesn’t ease you in at all. A demonic miasma of blasts and grating riffs smacks you in the face immediately. The vocal work adds to the chaos, the tone is superb. There are some extremely catchy moments in this track, riffs that get their hooks deep into you and insane double kick drumming that’ll keep your brain rattling around in your head for the entire duration. A definite favourite.

The fifth track ‘Contaminating All Tongues’ is a midpaced behemoth that crushes you into the dirt with heavy drumming and gritty, punishing fretwork. It’s a real slow headbanger that’ll have you putting the horns in the air. Off beat vocals just add to the creep factor as the track heads into doomy territory with a slow drum pattern accentuated by eerie guitar work before blasting into double kick blastbeat madness and a great shredding riff of pure ugliness.

Closer ‘Silver Dagger and the Breathless Smile’ is so mired in groove you can’t help moving to the devilish cacophony. The riffs are all over the place, the drumming intense and dynamic and the vocals are absolutely sinister. The sound is almost suffocating, holding you down and squeezing the breath out of you with black sludgy noise. It’ll make the hair on the back of your neck stand up, with the guitars ringing out pure evil and the drums terrorising you with blastbeats at any given moment.

Fans of the murky nastiness of black metal should give this a good few spins. It’s chock-full of monstrous goodness that Satan himself would approve of.


V: The Inside Scriptures is released on 17th November on Agonia Records 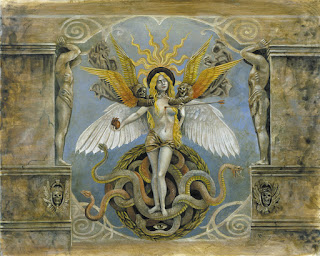