ALBUM REVIEW: The Beast is back with a Berserker of an album

WHEN Anton Kabanen split from Battle Beast in 2015 no one was really sure if he would be back. But lo and behold he is. His new band Beast in Black was formed not too long after and quickly given a chance to prove themselves supporting Nightwish.

Now without further ado, let us present to you, Berserker…

The titular 'Beast in Black' blasts off the album with pure powerful metal and screaming lyrics. Heavy, fast, driving power beats faster than your heart. The chorus is very catchy with powerful riffs and the guitar solo is fast and furious.

This sets the tone for the rest of the album.

It certainly is a statement from Anton that the Beast really 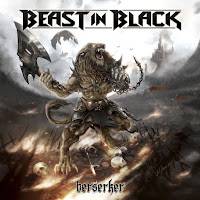 Next up is 'Blind and Frozen'”, with a pure 80’s power metal feel. It’s like Stranger Things but for metallers. Again the driving power of this track pushes you along at breakneck speed.

'Blood of a Lion' is a brash anthemic track switching from what can only be described as cheesy euro sweetness rousing of the troops to storm the walls.

'Born Again' starts off light but soon pounds on the weight with heavy pound beats and riffs. A solid enough song to enjoy a good headbang to. And it even has ‘that’ noticeable key change part too. It also just screams an animé main theme song.

The hot and heavy 'Zodd the Immortal' assails your ears with power and rage. Another fast and furious delivery of pure metal. Its an excellent song that won’t fail to get you in the mood for a meal of pure metal and some Judas Priest as dessert.

'The Fifth Angel' lands with a heavy industrial feel that grabs you by your throat and just won’t let go until you have listened to the whole song.

'Crazy, Mad, Insane'. It does exactly what it says on the tin. Heavy power metal goes techno! A really odd choice that really should not work in any way whatsoever. What the hell is it doing on a metal album? But defying the natural order of things it’s actually a really good track that combines the feel and sound pure catchy euro techno and a bit of power metal. You will probably want to hate this track, more because it will become an earworm that will not leave your brain alone. But, don’t worry, no one will judge you if you suddenly find those glowsticks you forgot to throw out when you found real music and left techno behind.

Then we have 'The Final Count…..er…….Eternal Fire. Catchy with plenty to enjoy about this track. Anton’s vocals perfectly suit the song and the keyboard just fits beautifully. However, all you might, confusingly, see when you close your eyes is the full ensemble of Europe belting out their well-known classic.

Now, 'End of the World' starts off a bit Europe-y again, but then takes a massive detour into powerful driven metal. Fantastic, catchy and full on.

'Ghost in the Rain' is a nice slow ballad that does its job and all but says ‘End Credits song’. Slow, luscious and ready to tug on your heart strings. But only if you have any of course.

Overall, it’s a symphonic album that seems to be a bit of power metal meets Anime. It would suit the likes of “Full Metal Alchemist” or “Black Butler” perfectly. In fact, you can’t leave out the manga/anime “Berserk” – which the band even credits in influencing 'Beast In Black', and 'Zodd The Immortal'.