ALBUM REVIEW: Intergalactic scumdogs GWAR back with The Blood of Gods

AS soon as you read, let alone say the word Gwar the cynicism meter is cranked to maximum. Yeah, they have some credibility somewhere, someplace, within the performance art of Slave Pit Inc. Or are they just an elaborate parody of Scientology that has gotten out of hand?

But when it comes down to the bottom line we're interested in the music: We'll deal with the hyperbole and the 'story' of Gwar later...

'The Blood of Gods' is their first recorded output since Oderus Urungus (Dave Brockie) died in 2014. Has that loss diluted Gwar in any way? Not at all. 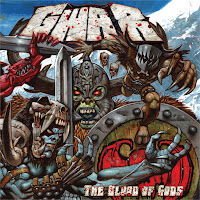 It is as over-the-top and lyrically stupid as ever. And, if you have a problem with that don't forget we grew up on Manowar and still listen to a lot of metal with battle lyrics.

Indeed the opener 'War On Gwar' is a hybrid of Manowar and Power Metal tomfoolery in musical terms, stretching through it's seven minutes plus path. However, it is when they kick into the fast-paced 'Viking Death Machine'. Heads down, full pelt metal that allows you to pick all the songwriting influences. (But, we have to say will the Viking Death Machine, alien-manned, be able to cope with heavy metal pirates once Alestorm track them down...)

Throughout you can see Gwar riff on the metal tropes as always. Some have wonderful nods to their listening habits - 'I'll Be Your Monster' tips the disease-ridden cap to Wednesday 13 et al.

Of course the album is peppered with silly samples, such as on the wonderful 'Death to Dickie Duncan' *

It wouldn't be Gwar without the likes of 'Fuck This Place' but there is a track here that stands head and shoulders above some of the previous work. 'Phantom Limb' may also reference many metal songs but it is executed to near perfection - six minutes and 10 seconds that reads as if Michael Moorcock and Terry Pratchett were doing acid with Blue Oyster Cult.

The inclusion of a pretty good cover of AC/DC's 'If You Want Blood (You Got It)' may seem a tad incongruous, but then again DC weren't adverse to a bit of cod horror such as on 'Night Prowler and Angus impaled by his guitar on the cover of the If You Want Blood live album.

At this point readers may ask has sanity totally went out the window - it's fucking Gwar!

Put aside the alien suits, the story about Gwar spawning the human race by shagging apes after being exiled.

Put aside the blurb that accompanied this: "The Blood of Gods, is nothing less than a sacred text chronicling the rise of humanity against their makers, and the massive battle between GWAR and the forces of all that is uptight and wrong with the world. Along the way, the band challenges the sins of their great mistake, from politics, pollution, and organized religion, to fast food, and factory farming. Humans are shown as what they are; a parasitical disease that must be eradicated before they suck the planet dry."

Once you get over that it stripped back it is simply an album that plays metal. Is it great? No. Is it good? Yes.  And, that ladies, gentlemen and scumbags of the universe as of any evening on this benighted planet is all that matters.

The Blood of Gods is released on Metal Blade on October 20th. 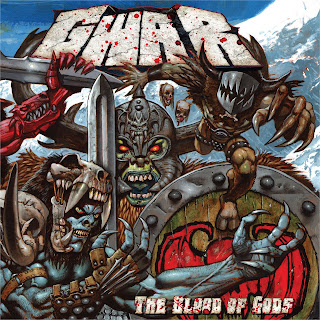