LEAVING aside the definition of miasma regarding odours, the remaining definition refers to a dark, oppressive atmosphere and that is a worthy ambition for any black metal act to strive for.

To title their EP 'The Geat Miasma' is an ambitious thing for Drakonis to take on - the sound must echo the sense...

Thankfully they achieve that on this three-track release. The ambitious promise of 'As They Rot' is surpassed with better arrangements, execution and darkness. 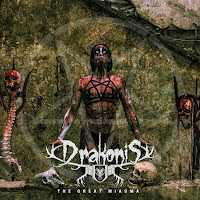 The seven-minute plus track 'Queen Of Sorrows' feels like their best track so far from Drakonis, brimming with oppressiveness allied with some sublime playing.

But to isolate this song is to do the EP a disservice. Despite the fact that there is a mere three songs this is a story driven collection. Even from a musical sense all the tracks are bound together.

Sucking up their influences and absorbing them into an attitude that draws from the past and brings a (dark) refreshing twist.

The band promise to reveal much more of the story of ancient gods and sacrifice as each accompanying video is released but the sense of coherence on each track.

While stylistically bound together the songs are well constructed individually but fit together. Opener 'The Great Miasma' is atmospheric and brooding before 'Let Us Pray' (see below) kicks the listener in between the eyes at the same time that it rolls around the inside of your skull.

As mentioned the closer is an outstanding conglomeration of ideas and will be a treat to hear on stage. There are clever elements, but not overblown or musically verbose.

In resisting the temptation to release an album Drakonis have managed to showcase their development and their ambition. Given the fact that this is their third EP and their ongoing development 2018 is a year to look forward for the band.


The Great Miasma is released on 1st December on Hostile Media