ALBUM REVIEW: Sorcerer present a grandiose vision on The Crowning Of The Fire King

ON first listen to Swede metal crew Sorcerer's The Crowning of the Fire King you think that they have been listening to Rainbow too often - in particular Stargazer. But after that initial cognitive dissonance there is a real sense of something epic this way coming.

Since their 2015 release 'In The Shadow Of The Inverted Cross' and the follow-up EP 'Black' there was a sense that they could stretch themselves a little further.

On 'The Crowning of the Fire King' they have taken that template and built upon it to shake off any comparisons, and produce an album chock full of grandiose songs. Apart from the atmospheric acoustic 'Nattvaka' there are no short songs on display here. 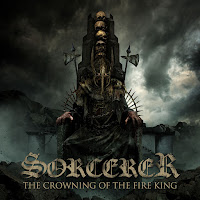 Opener 'Sirens' is a relatively brief five minutes compared to some tracks that nudge well beyond nine minutes. And, not a one has a second wasted.

Anders Engberg holds the attention with his compelling phraseology of each lyric, and Kristian Niemann and Peter Hallgreen manage to put together parts that enthrall - not an easy feat given the length of some songs.

For example, the title track meanders magnificently with no missteps, onomatopoeic playing and compelling throughout.

It is a similar story on 'Ship of Doom'. Any track that is almost a full 10 minutes needs the breath to develop and entrance. It succeeds.

Similarly closer 'Unbearable Sorrow' has the legs to keep the pace throughout it's nine minutes 55 seconds. And, what is more it has the balance and arrangement that makes it seem like a much shorter song.

True, Sorcerer reference a lot of what has went before them, but The Crowning of the Fire King' is a truly wonderful immersive experience. 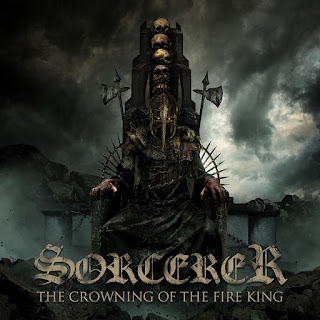 Email ThisBlogThis!Share to TwitterShare to FacebookShare to Pinterest
Labels: Metal Blade, Sorcerer, The Crowning of the Fire King