OAKLAND rock veterans Y&T are making a welcome return to Belfast on Wednesday, November 8th for a Limelight1 show.

If it seems that Y&T have been around forever, its because they have...well since the 1970s. But Dave Meniketti is dragging his crew around the world once again.

It is a tribute to the band's resilience that Meniketti has picked them all up after the death of original bassist to lung cancer that Y&T still continue, all be it with only the one original member at the helm. 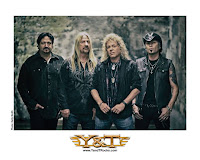 With 18 albums and a run of hits that are rotation somewhere in the world as you read this with songs such as 'Summertime Girls', 'Forever' and 'Mean Streak' stuck in the minds of those who grew up as music videos became the norm and MTV still had music on.