ALBUM REVIWEW: Elegy to agonies on Anatomy of Loss from The Crawling

THE agonies of life, the pain of loss, the morose mundane existence of 21st Century life - yes The Crawling haven't released a happy clappy début album full of soaring choruses and posed pretentiousness with 'Anatomy of Loss'.

It is sourced from living in a bleak commuter town pretending to be a city; concrete corrosiveness and a stark pretentious populace blithely living in a bubble of hyper-normalisation, consumerism, avoiding reality lest it intrude on their narcissistic lives. 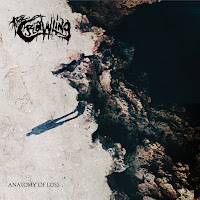 Andy, Stuart and Gary have produced an album ridden with pain, as they say on 'Poison Orange' the sense of "drowning in horror" pervades each tortured note.

If there is hope to be taken from this album, it is only the almost cathartic realisation that others share your loathing for what passes as civilisation.

Musically doom, sludge and bleak metal have been absorbed into a sensibility where the despair on "Acid On My Skin" is the most 'cheerful' sounding track, with its terror and chorus about tearing out ones own eyes.

However, while there is a monochrome level within the subject matter there is a three-dimensional element to each track. The careful use of repetitious riffage is matched by subtle changes of mood, with Gary's measured deployment of fills rather than trying to overwhelm each track, such as when after a minute of 'The Right To Crawl' the speed moves from up a little, emphasising the full-tilt lyrical rant.

On the same track Andy and Stuart pick out with delicacy the space for the listener to briefly surface, gulp a mouthful of oxygen before returning to the ocean of bile.

This is not an album to sit lightly and play in the background; this is an album to, like that ocean of bile, to immerse yourself in; wallow in its fear and anger.

Anger is probably the best way to characterise the feeling as you contemplate the words. It is a brooding anger that loathes itself as it lashes out at a putrid world. For every careful note chosen there is a sense of hatred, a resonance of personal distrust and an elegy to agonies thrust upon the individual.

There are no brief interludes as each song is given the right length, with the shortest song, 'All Our Failings' just shy of four and a half minutes.

What it does mean is that on the likes of 'Violence Vanity and Neglect' the timing is such that it is the metal equivalent of Tantric Sex - delaying the climactic musical moment to ensure each feeling is savoured like barbed wire drawn across taut skin.

Closer 'Catatonic' caresses the inner fears with a depth and development of the song such as to take loss and yearn for a return that is never possible. Like all songs on this release the arrangement and the pacing match the lyrics and music perfectly.

It is unfair to pick a 'best' track from an album such a 'Anatomy of Loss' as all stand true to themselves, each of the seven songs to be experienced as one idea. The art and craft of writing albums has not been lost on The Crawling.

Long may their misery master over our aural needs.

Anatomy of Loss will be officially launched on Saturday, April 8th in Limelight2, with support from Valpurga and Shourded.
Posted by Jonny at 2:24 pm