ALBUM REVIEW: Stephen Pearcy hits it out of the park on Smash

With a career spanning over 40 years and legal battles over the ownership of the Ratt moniker seemingly put to bed Stephen Pearcy is back with his fourth solo album ‘Smash’ mixed and mastered by Pearcy himself and bassist Matt Horne.


Track one ‘I Know I’m Crazy’ opens with a strange synth sound before leading into a song with a strong heavy riff mixed with a 90’s sound that’s almost grunge in parts. The first noticeable thing is that although Pearcys’ voice has changed subtly over the years (he is nearly 61) it’s still unmistakably him and still very strong.


‘Ten Miles Wide’ is a straight out and out rocker and the first single off the album (or should that be youtube release) It’s old school Ratt with a retro flair with a modern twist and a cracking solo to go with it!


‘Shut Down Baby’ is the first surprise on the album as it’s got a bluesy Led Zeppelinesque groove to it, not just in composition but also in Pearcy’s lyrics and vocal delivery. Think along the lines of ‘Rock n’ Roll’ and you’ll get the general idea. 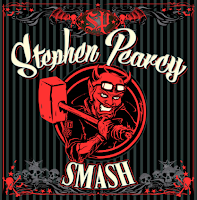 Fourth track, ‘Dead Roses’ is the first of two songs that are seemingly written about the aforementioned legal battle. Opening with screaming the word motherfucker is the first hint at the lyrical content and may well be aimed directly at Bobby Blotzer. It’s a suitably heavy song with a touch of venom to it.


‘Lollipop’ has an interesting subject matter, sex! It’s got a catchy riff to it and a nice solo again and could almost be an 80’s hair metal throwback if they bring out a video in the same style......


Next up is ‘Hit Me With A Bullet’, a hard rock old school style Ratt tune with all the elements that fans of that era will relate to and enjoy with it mid to fast tempo.


‘Rain’ has another mid tempo hard rock riff and is a story of life, the challenges it brings and the message of not letting life pass you by. The keyboard  middle section followed by a hard riff and orchestration almost acts as a musical metaphor for life as a whole.


Track eight ‘You Want Too Much’ has a great driving riff and could possibly be the second dig at the legal process over the ownership of the name Ratt. The solid rhythm section perfectly fits the riff which is quite heavy in places.


‘What Do You Think’ is another blues style song, again with a hint of Led Zeppelin thrown in. It’s a song with subtle tempo changes that works really well.


Track 10 ‘Jamie’ is a song with great hooks between the riffs and choruses and an up tempo beat that is hard to stop your head nodding to. Featuring possibly the best solo on the album as well it’s one of the stronger tracks on the album.


If the next song ‘I Can’t Take It’ reminds you of early Ratt then that’s probably because it was mixed and mastered by Beau Hill, the man behind Ratt’s first four albums. A lively song that’s a bit more mainstream and with softer isolated guitar parts similar to what Van Halen used to do. Another good tune.


‘Passion Infinity’ is a faster paced song with a nice bass intro and some melodic parts to it with good lead and background vocals. It’s a song that seems to be about mind control with a quite frantic solo and very strong drum and bass parts.


The album ends with the semi power ballad ‘Summers End’, a song about memories, loss and missing someone. It’s not quite the power ballad it could be and maybe would be better served elsewhere on the album rather than the final song. That being said it’s not a bad song, quite dramatic in parts but it just doesn’t quite the album the finish it deserves.


Overall ‘Smash’ is an album diverse enough that Pearcy can’t be accused of cashing in on the Ratt name but with just enough throwback to the earlier days to keep fans of the original band happy. It’s well written, mixed and has great performances from all the band members.


Very solid and very worth while adding to your collection.

This is his best effort to date outside of his Ratt catologue. Worth the wait. Now tour the UK plz!