ALBUM REVIEW: MIchael Schenker Fest live in Tokyo celebrates all that is great about rock

WAY back in the 80s the Michael Schenker played twice in Belfast's Ulster Hall as part of a set of tours that encapsulated what that era represented; a cross over from the classic era of early Scorpions, UFO, Purple, Zep and Sabbath and the burgeoning newer metal and hard rock sounds.

Bands sounds were metamorphosing from the days when Tokyo Tapes, Live and Dangerous and Strangers in the Night were being exceeded as new benchmarks were set as live performances took on ever better set-ups in terms of PA systems and dynamics and delivery what were enhanced with more and more sophisticated songwriting - snappy tracks sitting comfortably with extended jams and solos. 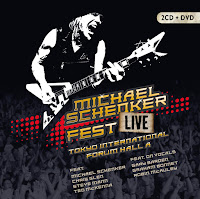 Schenker embraced that new period and stamped his mark with four landmark studio albums in the 1980s and one live epic recorded in Japan, 'Live At The Budokan'.

Now 35 years on from that release Schenker is set to release 'Michael Schenker Fest Live in Japan' a celebration of those past years that re-unites Michael with vocalists Gary Barden, Graham Bonnet and Robin McCauley in a two CD/DVD set (also on Blu-Ray and Vinyl).

The sumptuous packaging comes with  an insert booklet - and in the centre spread there is a picture of the band, Michael at the centre arms aloft with 'V' peace signs thrust into the air and a smile spread across his face. 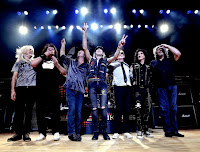 It is a single image that captures what is laid out in each of the songs. This is a group of musicians that now realise the glory that they achieved and the joy they brought to hundreds of thousands of people - and there's no need to let that lie in the memory when you can bring it once again to living, breathing essential life.

From the introduction and 'Into The Arena' there is a palpable sense of vibrancy around every performance - sure Schenker is at the centre of everything with his smooth, melodic playing and astonishing lead work - but Ted McKenna (drums), Chris Glen (bass) ad Steve Mann (guitar and keyboards) also seem to be having a ball.

It is no secret that the collection of vocalists and Schenker had a fractious relationship in the past, but it is clear that bygones are bygones and now they all see the legacy that they have.

"It's wonderful how we all got on," said Schenker. "It felt incredibly natural as if it was always like this. Right from the start of rehearsal the chemistry was great. No problems, just pure fun."

Take your pick from the hits and they are there - 'Cry For The Nations', 'Armed and Ready', 'Assault Attack', 'Dancer', 'This Is My Heart' and they are all there as each vocalist takes to the mic to deliver a show that the Japanese audience laps up.

The sound throughout is impeccable on CD and DVD and many of the close-ups of Michael capture the fluidity of his playing that most would struggle to emulate. At times there is a graininess to some of the blacks - and we all know the row of Marshalls is superfluous - but that somehow adds to the whole package. It is not perfect, but then again it never was. Instead the vibrant pulse of rock at its most vital runs strong.

The extended version of 'Rock Bottom' after 'Shoot Shoot' raises the temperature until the obligatory 'Doctor Doctor' ends the show with all three vocalists on stage. 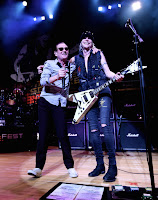 This is a release that captures the era that saw Schenker's influence spread - it's no mistake that Iron Maiden's show always starts with Doctor Doctor booming over the PA.

However, this is not a slice of nostalgia for the sake of it. This is pure and simply a celebration. Michael is still recording and playing new songs, but this is about taking a moment in time, listening, watching and revelling in it.