NEW Jersey mathcore legends The Dillinger Escape Plan will play Belfast's Limelight on June 8th, with a date in the Academy, Dublin the following night.

They are on a tour backing last year's 'Disassociation' release, with Ben Weinman saying it will be the last album and tour for The Dillinger Escape Plan, with the band probably calling it a day after festival dates.

The band were recently involved in a road traffic accident in Poland, resulting in injuries and some tour dates being cancelled but the Belfast show in June was today (23/02/17) confirmed.

Tickets for the Limelight2 show, priced at £20, go on sale tomorrow. 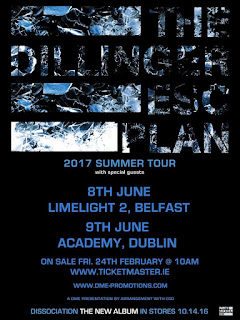