SO far Belsonic have yet to add anything remotely metal, but the Green Day/Rancid show looks like a nice one for retro punk fans. However those younger readers may fancy a wee tilt at the latest announcement.

Canuck act Arcade Fire will play at the new Ormeau Park venue in their first ever appearance on the island of Ireland.

Set for 13th June 13th, with tickets going on sale this Friday, and they have been described by,  the somewhat unreliable rock source of the Daily Telegraph as "the greatest live band in the world", which only goes to prove the Telegraph writers have never been to a Maiden show.

Nevertheless, Arcade Fire have garnered significant support from the curious to earn them chart-topping status in the UK, US and several other nations.

The Montreal natives have managed to earn themselves enough of a fan base to make sure that even the curious rockers may fancy a nibble on this one.

Hopefully Belsonic can also add some muscle as well as those already announced. 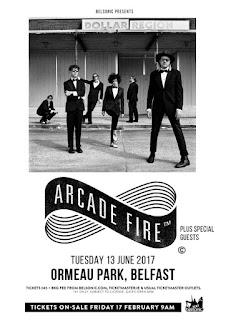