BATTLE Beast. 'Bringer of Pain'. Some heavy, some light. The perfect mix?


Battle Beast produce some of the best work the first few weeks has seen, with some heavy riffing and technical soloing. This is a rather large roller-coaster with next to no downs but a lot of ups.


The album starts of with ‘Straight To The Heart’ loaded with a chunky riff and excellent vocals from Noora to get the ball rolling. This is a great power metal song. Some very good lyrics like "light me up before I go…" This is a great introduction to the album.


Title track ‘Bringer of Pain’, which is a shift from the previous song as it is more aggressive and with the double bass firing away this is a heavy way to tell the story. 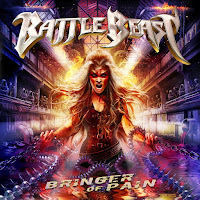 Again there is some very talented guitar playing. These types of songs showcase the range of Nooras' voice as she can sing a metal song and then can deliver a soft well written balled too.


‘King For A Day’ - A change again to a slower nearly a rock song. This about the rotten politicians that seem to think they rule the world and can do what they want with no ramifications. A relevant statement in the current age.


The next song is the single ‘Familiar Hell’. One of the best songs on the album. Very catchy and one to really sing along to. This song has some great riffs to go alongside the amazing vocals again.


Now onto the best song of the album. Pure power metal glory. It’s as if Battle Beast were channeling their inner Manowar. With lyric like "Bastard son of Odin, Born to kick your ass." This is some great song writing and lyrics to charge into battle singing.


The next song is an odd one. ‘Dancing With The Beast’ is a dance song, in the old 80s style of things. It is a bit confusing but after a few listens and you discover it is a great song. They are showing another genre completely how to do it.


You can't help yourself dancing to this, would fit right into any old school 80s movie and not feel out of place. They've managed to keep the distorted guitars in as well!


The final song of the album is ‘Far from Heaven’, which is a true ballad again showing that they can expand their sound and make some really god music while they're at it. A different way to end an album, most in Battle Beast’s musical space would finish with a fast paced attack but this was a different way to exit and an enjoyable one. Some incredible vocals on show here again.


Overall this album is one to be reckoned with. A good mix of styles and some traditional heavy metal.


This will be their fourth studio album and this shows that they are unique introducing some great ideas to their sound and leaving a lot of paths for them to follow in the future incredible work here. In terms of the broader metal world 2017 has a lot to live up to after this.
Review by Zakk Traynor
Posted by Jonny at 8:08 am