SOMETIMES you come across a band and really don't know whether to take them seriously or laugh - remember Manowar signing a contract in blood?

First time round in the late 90s and early noughties when Virgin Steele completed three 'metal operas' on theatrical stages one didn't know whether to take them with the proverbial pinch of salt or write it off as power/symphonic metal taken too far...they even were reviewed in Opera News magazine! 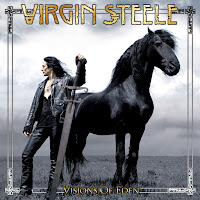 However, sitting down with the re-release of 'Visions of Eden' maybe it is time for a re-evaluation. After all, set aside the operative pomposity 'Visions of Eden' itself was the 11th Virgin Steele album and stands proud in the band's oeuvre.

This month Virgin Steele the album is out as a double CD - one featuring "Barbaric" re-mixes of 'Visions of Eden', the other "Romantic" re-mastering of the same album. Confused? Well, seems a little superfluous on the surface, but with a decent stereo or set of headphones you can notice the differences.

Having said that whether fans of Virgin Steele would want to shell out for another version of 'Visions of Eden' remains a moot point because for those who have maybe had Virgin Steele pass them by this could serve as a good introduction.

There is an excellent variety of styles on display, from the full on power metal ('Childslayer'), symphonic swoops and sweeps ('The Hidden God') and slowed down material ('When Dusk Fell', and ('God Above God') and enough to entertain and ponder.

Of course the 'vision' behind the album was never to re-count a biblical myth, rather a challenge to a belief system that left previous mythos such as paganism and others, especially the male dominated divinity rather than the goddesses of previous beliefs.

Indeed the full title of the album as presented was 'Visions of Eden - The Lilith Project: A Barbaric Romantic Movie Of the Mind'. Overblown? Well what other way would you want your power/symphonic metal?

This is somewhat a rather self-indulgent project (coming after several other Vigin Steele re-releases) to metal fans in the British Isles, but when you go back to this album, like many of Virgin Steele's releases, it stands the test of time, and marks a moment in time when you can at last admit you love all the grandiosity that comes along with it.

Not that we're going to sign anything in blood to that effect!

Visions of Eden is released on Steamhammer/SPV on 17th February