NEWS: SLF comeback to Belfast, with The Stranglers, Ruts DC and The Outcasts

BACK  in 1977 something happened that changed the face of music in Northern Ireland. With the Clash and Pistols kicking up a punk storm four snotty nosed kids from north Belfast came together and birthed a monster that still rumbles on today.

Stiff Little Fingers took what they learned of rock, added a snarl and a wickedly accurate portrayal of life during the so-called 'Troubles'. Now, 40 years later Jake Burns and co are coming back to Belfast ready to show that they are still as musically and lyrically relevant as ever - and party harder than most.

On Saturday, August 26th at Custom House Square SLF will play their biggest ever hometown show as part of the Belsonic festival. And, they're bringing along some friends.

The Stranglers, Ruts DC, our own The Outcasts, with Terri Hooley will all be part of the bill...That is what could be called a killer line-up...nope, it is a killer line-up!

A couple of years back SLF released the superb 'No Going Back' a starkly honest album, filled with personal pain and looking with a caustic eye at the world as it is. It reached number one in the Official BBC Rock Album Chart and a DVD of their show in Glasgow's Barrowlands 'Best Served Loud' documented their 25th straight St Patrick's Day show in the legendary venue.

What is sure is many of the fans know every word of every song, something that Jake is all too aware of.

"You have to strike a balance," he said. "The difficulty with a band like ourselves is to try not make it sound like a cabaret band. Obviously, it’d be very easy to go, ‘Hey, here’s another old one you may remember.’ A lot of the old songs the audience greet like old friends.


"I suppose it’s the same as any band that’s been around for any length of time. And yes, there are nights that we don’t particularly want to play 'Alternative Ulster' or 'Suspect Device' because we’ve heard them ‘til they’re coming out our ears. But there’s always the possibility that somebody out there has never seen the band before, never heard them."

Whether it is newer material, or the classic SLF anthems, what is sure is that on August 25th there will be a loud and proud moment for fans and the band themselves. And, together we are all part of what is Alternative Ulster - our national anthem. 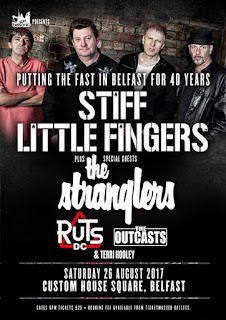