Southern California heavy blues hard rock trio Idlewar have upped their game with their second release. Singer/bass player James Blake solidifies why he is one of the best singers in rock today. With a continuation of varied moods, tempos and groove. IDLEWAR’’s music is far from one dimensional. With the record being produced by drummer Pete Pagonis, Rite maintains the inspiration and grit of their debut.
Their singer, James, describes the record as “a Mad Max machine like convoy; a group of ferocious apocalyptic vehicles barreling through the wasteland full throttle...about to come apart at the hinges. Then every so often they slow or even stop to survey the landscape all the while contrasting their silhouette of destruction against a backdrop of serenity.”

The band returns to the UK in early Nov for a tour with a date at the already sold out Hard Rock Hell XI and an appearance at the Inaugural HRH Awards on Wednesday 8th.

Idlewar have only recently signed to Off Yer Rocka and the titanic Californian trio insist they have found the perfect home for their heavy blues rock after joining a powerful roster that includes The Quireboys, Bonafide, Tequila Mockingbyrd and more. The band has one album and an EP under its belt and is readying the release of a second following the success of 2015’s devilish Dig In EP and last year’s instinctive follow-up Impulse.

“We are excited to be partnering up with Off Yer Rocka for so many reasons,” said the band. “For one it is a label that is currently geared toward our type of music. It’s what they know. We think that is important, in this day and age, to really try and distill down what you are and how to present it. Finding an audience is by far the toughest challenge facing bands right now and we think Jonni and the folks at OYR really have some great ways to do just that.”

Idlewar made it to the UK last year for a brief run of shows supporting rising stars Stone Broken. But that tour only whetted the band’s appetite for more as their fusion of Led Zeppelin, QOTSA and Clutch captured the imagination of British fans.

Jonni Davis, CEO at Off Yer Rocka, added: “We are always scouring the world for fresh new talent and we feel we’ve found something special where Idlewar is concerned. They are not young guys but they are hungry for success and determined to succeed. 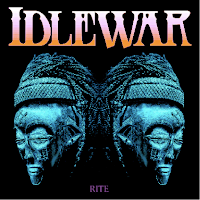 "That’s what I love about Idlewar. They’ve only scratched the surface as far as the UK and Europe is concerned and we’ll be bringing them back over here in the autumn. I’ve heard the new songs and they are killer. They’re already lined up to play HRH XI and we have exciting plans for this band.”

Fronted by James Blake – an unstoppable vocal force who teaches physics and is a qualified martial arts coach – Idlewar leave no stone unturned in their pursuit of some seriously heavy music. Rick Graham’s iconic guitar solos add a unique energy to the talented trio while no-holds-barred drummer Pete Pagonis is a musician reborn after ending a self-imposed seven-year exile from the live scene.

Check out the brilliant video for Glory, from Idlewar’s Impulse album, click
here.