SO  here we have it, the first (hopefully) annual Hard Rock Hell Sleaze fest. With an unreal line-up of bands, so much so it’d wilt your hairspray, it’s every Sleaze enthusiasts dream.

With Hair Metal Heaven the week before, you can’t help but worry as to whether this event would be a success or not. Luckily, the HRH loyal fans turned out in their true force for this event. Here is our guide to the bands we most enjoyed hearing each day!

Day one begins with a selection of acoustic sets for Royalty members. Unfortunately, Kaato had to pull out from their set – leaving us with the delights of Daxx & Roxanne, Devilfire and Bai Bang. We have to say that of the three Bai Bang stole our heart. They had a sincerity and honesty with the audience which was unrivalled. With lighters held high in the air, Only The Best Die Young was a particular tear-jerking moment. Not many bands manage to translate their glam/AOR sound to acoustic well, but boy did they! 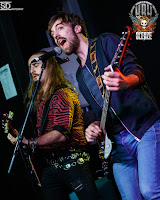 The remainder of the early afternoon keeps the audience firmly focused – and firmly sardined – to the second stage, as the main arena area (although open to mill around in) doesn’t have a band hitting the stage until 5 pm.

Nevertheless, New Generation Superstars kick-start the proceedings with raw adrenaline. With singer AJ akin to Nicke Borg, the band has an attitude of sleazy swagger with a punk edge that encompasses exactly what this festival is all about. By the time the band finishes playing and they attract in all the stragglers from other areas of the venue, like sirens luring sailors to their death.

Next up on this stage, which as an aside is becoming hotter and hotter by the minute, is Daxx & Roxanne. Although never catching these guys previously, I quite enjoyed their bluesy feel and it provided a nice respite from the previous proceedings. Although unfaultable as a band in terms of tightness and technique, one can’t help but think that they could do a little more to bring the energy up in the place and play on the baiting crowds energy a little more.

Then it’s time to see Bai Bang in their full electric glory. Having caught some of their acoustic set, it’ll be exciting to see what this band has to offer in their traditional live setting. Frontman Diddi Kastenhol wins both the hearts and minds of the audience throughout the set – and has a great voice to boot! This band embodies Scandinavian sleaze to its truest potential. They also encompass beautiful elements of AOR harmonies throughout their set and are a joy to watch live on stage. 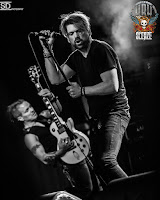 Quickly, we shoot over to the main stage to see it’s grand kick-off and Gasoline Queen open things up. One thing that’ll stick with you is just how ferociously loud these guys are. They stormed the stage as the first act, engulfing every inch of it with their hook-laden riffs.

Nipping quickly back to the second room to catch one of the remaining acts of the day, Devilfire has an unfortunate set due to technical gremlins throughout. This plagued not only the microphone but spread to both guitars too. However, like the consummate professionals, they are; they don’t let this stop them and keep on playing. Gremlins aside, this turned out to be quite as they continued to thunder through the rest of their set. Well played boys, well played.

Having swerved the early morning acoustic sessions (once can only imagine to sleep and to preen) it’s time for Kaato. I have to say, these were one of my favourite bands of the weekend! With an unrivalled seventies rock swagger and cool enough to make your pint freeze, these guys know exactly what they are doing. Adorned in fur coats and little else – the band play a blinder of a set in the vein of The Biters and The Struts. Frontman Kurt oozes sleaze, glamour and glitter in equal amounts. 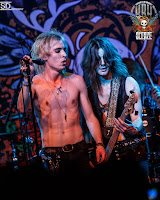 However, whilst playing their set, the headliner of the second room took to the stage, which unfortunately seemed to cause some loss and sway in their crowd. Still, a band well worth catching on their upcoming UK tour if you can!

Next up on our list, Stop Stop. Wow! What a band – no words could define the limitlessness of this bands energy! Adorned in face paint and sparkly suite jackets it’s like T. Rex meets the showmanship of Alice Cooper. This band is here to party and they are not leaving until every single member of the audience joins them!

You can’t help but aimlessly join in and attempt to sing along with the words that you don’t know – yet! They border the line between genius and insane and the crowd seemed to utterly adore the level of carnage they brought along with them.

Then follows a swift jaunt back to the main stage to catch Wildside Riot and make ourselves comfy for the rest of the evening’s delights! When you talk about Wildside Riot, you can’t fail mention Mr Rocky Shades. What a character! He’s like marmite – you either love him or hate him! One thing is for sure, you cannot fault this man’s stage bravado or persona. Churning out hits from his time in Wratchchild too, the audience seems to lap this up. Although – we have to say we are intrigued by the story of the nail gun! When Rocky isn’t having chat with the audience, the band are a tight well-oiled machine and Mr Suicide plays his second set of the day with ease! 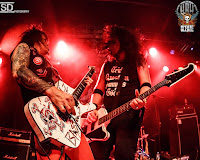 Tigertailz then follow and absolutely demonstrate what it means to be a glam band in the modern age. With a stage show that wouldn’t have been out of place in some of the most massive venues out there, the band represents what it means to be true professionals. Singer, Rob Wylde absolutely owns the stage – sprinting around the entire stage, engaging with the audience all around and not even a little out of breath. They play a classic feel-good Tigertailz set through and through and you can hear the audience singing along with pretty much every single track. The highlight of the set, expectedly so, is Love Bomb Baby where I’m not sure who was louder – the band or the audience. This felt like a headline set all of its own.

Then we get to Vain. Going by the feeling in the crowd, and various chats in the smoking area outside later in the night, it seems the crowd are divided on this one. Some people feel Tigertailz should have headlined the night, and truthfully many were wondering just how bad Vain would be.

Yet others feel like Vain are in their rightful place. Having caught Vain’s set at Hair Metal Heaven previously, I knew what to expect from the San Fransico sleazers and I knew that people would not be disappointed. The band take to the stage, with Davy traditionally barefooted and poured into a pair of red leather spandex that one the bravest and beautiful could pull off. (And for the record, I think he absolutely works it!) The first thing that strikes you when watching this band is the ageless quality to Mr Vain’s vocals. Even though he’s suffering a cold this evening, this does nothing to dampen his or the band's performance at all. My only criticism would be that the stage chatter between songs - although hilarious – was strikingly similar to that I had heard the week before. The most beautiful highlight of the set came in the form of 1000 Degrees, wherein the house lights were dimmed slightly and there was a sultry, sexy feel to the whole affair.

All in all, an amazing day filled with amazing music – and we’ve still got one more day of this to go!! Can we please have a HRH Sleaze weekend at Camp Pwllheli in Wales, pretty please? 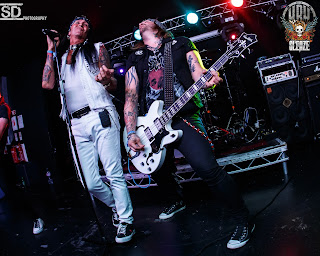 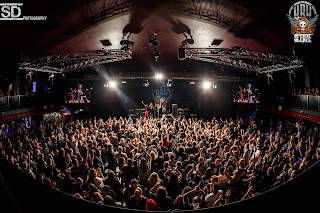 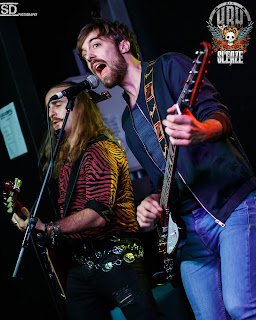 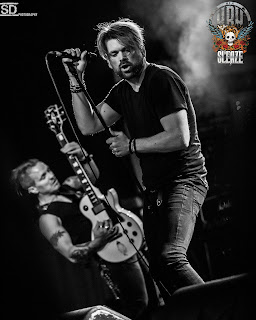 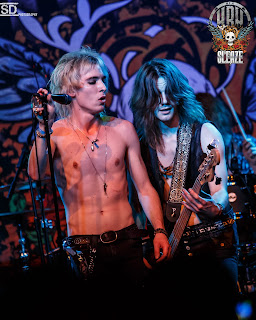 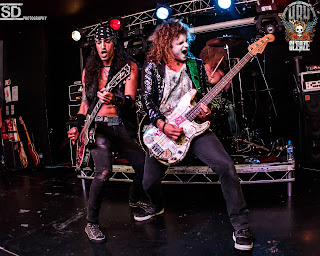 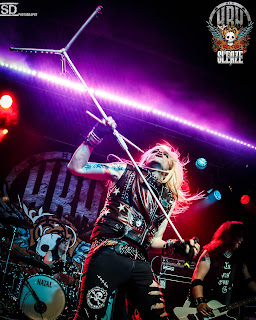 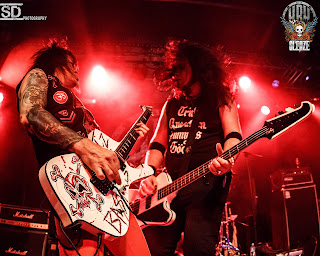 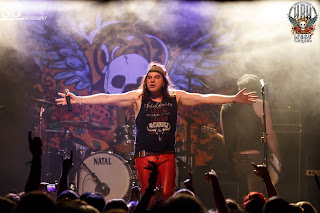 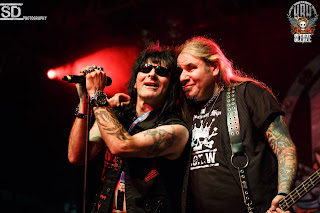