ALBUM REVIEW: Get your neckbrace on for The Black Dahlia Murder new slab Nightbringers

The first track, ‘Widowmaker’ starts off so eerily and then come the riffs! Unbelievable fretwork and superhuman blastbeats accompany a scream straight from the pit of Hell. The vocals are filled with hatred and animosity, the lead work is insane, and the drums and bass absolutely monstrous.

‘Of God and Serpent, of Spectre and Snake’ just grabs you immediately and pulls you kicking and screaming into a mire of brutal riffage and a drumbeat that’ll give you Vietnam flashbacks. It’s heavier than a pair of concrete shoes, the vocal work is vicious and the solo is superb. 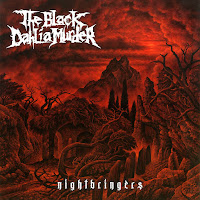 The albums third track ‘Matriarch’ is fast, furious and wickedly intricate. Melodic and savage in equal measure the tight double kick drumming and pulverising riffs will have you banging your head into the wall. The vocals are wonderful, switching from a higher melodic style of death metal to brutal roars with ease. The lead playing, yet again, is on another level.

The title track ‘Nightbringers’ is ridiculously heavy. There is a real sense of the old school Gothenburg melodic death metal scene going on throughout this track. The vocals, the heavy melodic guitar riffs and the lightning fast drums just scream Swedish melodic death! The solo comes out of nowhere, devastating your eardrums and making your eyes bleed.

‘Jars’ just starts with blasts and pummelling riffage and continues the intensity throughout. The leadwork is like a Turkish kebab at 3am, so tasty and probably bad for your insides. The vocals are that of pure aggression, the drumming is intensely fast and the pile of riffs causes complete carnage.
The solo will give you an aneurysm or seven.

The sixth track, ‘Kings of the Nightworld’, starts with a load of pinch harmonics woven into an unbelievably technical guitar riff. The drumming is killer, bouncing from the groovy to the extreme with supersonic double kicks. The vocals are strong and dynamic, and the solos are frighteningly good. You’ll be chanting along to the chorus on this one too.

‘Catacomb Hecatomb’ is brutal from the first note, blastbeats and melodic fretwork fire the track along at a panic inducing pace. The vocal work crushes everything in its path with uncontrollable anger. The chorus is wonderfully melodic in contrast to the verse and it works so well. There is one riff in there just after the chorus that will make you want to rip your own head off and hurl it at innocent bystanders. It is powerful! You will require neck surgery, you have been warned.

‘As Good as Dead’ immediately starts with technical fretboard wizardry before aurally assaulting you with razor sharp playing and hammering double kick drumming. It’s so heavy and catchy at the same time. The vocals fit perfectly with the music in their intensity. The solo... that solo! It’s hard to put into words just how good the solo is. It’s insanely melodic, intricate, technical... it’s simply wonderful. This track will get stuck in your head. A definite favourite.

The final track, ‘The Lonely Deceased’ has a really great bassline that’s accompanied by an almost melodic black metal riff and blastbeat after blastbeat after glorious blastbeat. There is so much melody and power throughout the track. The vocals are absolutely killer and the lead work, much like the rest of the album, is razor sharp and so on point you’ll cut yourself on it. A strong end to a strong album!

If you’re a fan of wearing a neckbrace and sounding like you’ve drank bleach for three days straight get this album. You’ll scream yourself hoarse, you’ll crack a few vertebrae and you’ll love every second of it.