IF 'Hammer of Witches' proved that Cradle of Filth had regained their edgy artistic mojo then new release 'Cryptorian' shifts them up to another level entirely.

This is the marriage of previous musical excesses and a true sense of gothic terror - not in the mainstream sense of 'goths' but reaching into the dark labyrinthine murk of Victorian streets, where danger and sensuality stand side-by-side.

'Cryptoriana' is a tapestry of lust and evil delivered with all that you would expect from Dani and co.

Apart from the short, sharp shock of opener 'Exquisite Torments Await' (and they do) each of the other tracks are allowed the time to breathe musically and in their narrative. 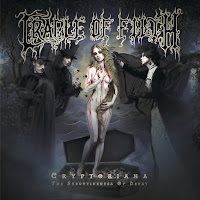 As with almost all Cradle of Filth albums the narrative is a crucial component. Indeed, the sub-title of 'Cryptoriana' is 'The Seductiveness of Decay' a stunning track that cements the narrative of a Victorian England where the supernatural sat aside the industrial murk and poverty; where the rich indulged a quest of what lay beyond while maintaining a very British reserve to hide their sinfulness.


“The album, both lyrically and artistically, is infused with Victorian gothic horror and thus the title is a reflection of that, Cryptoriana implies the Victorians’ infatuation with the supernatural, the grave and the fervently ghoulish." - Dani Filth

The tapestry woven is such that to capture the sense (and sensibility) of the tales requires a musical landscape as intense and evocative as the lyrics. And it is lush with moods and suggestive passages.

Shaw and Ashok almost war each other in trade-offs and solos that are mainly delivered with speed and intensity, but are also tempered with shifts of pace and tempo. With Škaroupka and Firth tied together with a rhythmic umbilical chord that sense of doom infused throughout sits as a warning to lesser mortals.

However, it is the enchantress Lyndsay Schoolcraft that adds the flourishes that set the tone so well - her keyboard work sets scenes, add unexpected elements, and as always delivers vocally. Perhaps this is one of her finer demonstrations of her pipes recorded to date.


“The general vibe in the band is exceedingly positive as we gear up for the album’s release. We have an amazing album and video under our collective belts, a new manager who has religiously prepared an upcoming world tour for everyone to look forward to and the band are still white hot and collectively firing on all cylinders, much like a ballistic missile fired upon Horsell Common, in the last years of the 19th century when human affairs were being watched from the timeless worlds of space!” - Dani Flilth

To be clear, all eight tracks deserve repeated listens to fully enjoy the rich rewards and tones within. However, the concluding track 'Death and the Maiden' is one of the finest, textured tracks Cradle of Filth have released. If not for it all other tracks on Cryptorania would have vied for that title.

Sure, for many Dani and his crew have been the butt of ill-informed jibes with the many line-up changes, but on Hammer of the Witches they proved themselves to be a band that has evolved without losing sight of their core principles. Cryptorania takes them to the next level - we can't wait to see them in Belfast's Limelight on 30th October. Get listening to this album and get prepared!


Cryptorania is released on Nuclear Blast on 22nd September 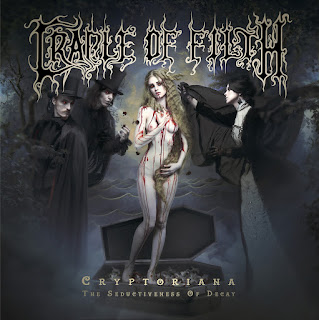