ALBUM REVIEW: Dyscarnate produce a must listen album on 'With All Their Might'

Following their acclaimed 2012 album And So it Came to Pass, UK death metal destroyers Dyscarnate are back after five long years with another top quality slab of extreme, ear destroying music.

‘With All Their Might’ is a tour de force of potent, punishing metal to overload the senses.

The first track, ‘Of Mice and Mountains’ is a great album opener with heavy riffs and double kicks aplenty… The vocals are strong and aggressive and the bass gives a dynamic and bottom heavy level that intensifies the guitars perfectly. Just under the two minute mark begins an absolute pit opener of a riff. This is crushing death metal track, the riffs are ridiculously heavy and the drumming is tight and powerful. 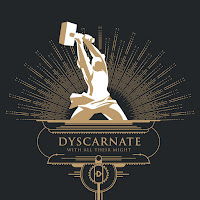 ‘This is Fire’ has a very strong Gojira/Meshuggah vibe to the intro; the guitars carve out a groovy tech influenced path of destruction that the rigorous drumming compliments perfectly. This is definitely a song to bang your head to. It’s heavy, really heavy but at the same time it’s so catchy. The songwriting is strong and the aggressive dual vocals of guitarist Tom Whitty and bassist Al Lewellyn are once again completely on point.

From the opening few bars of ‘Iron Strengthens Iron’ all I can think is “oh, those drums”! Starting off nice and they soon descend into pounding machine gun like double bass, proving once again that Matt Unsworth is a machine behind the kit. The riffs are strong, a prime example of great, grove influenced modern death metal.

As ‘Traitors in the Palace’ begins I can feel a chill go up my spine. It is so dark and eerie, and suffocating in its atmosphere. The screams that pierce through the grinding, evil riffs are what make this track stand out. The drumming is relentless, driving forward the oppressive and sinister wall of sound. This is, for me, how great, midpaced death metal should sound. It should give you that uneasy shiver, it should feel ominous and Traitors delivers that by the truckload. It is probably the best track on the album.

The only way to describe how the fifth track, ‘To End All Flesh Before Me’, made me feel is to say that it kicked in with such technical malice it grabbed me by the throat and shook me pretty hard, every uttered syllable is dripping with venom and the pure aggression is so evident deceased relations of mine would take notice. Tight, intense riffage and a drumbeat that would make a panzer tank look like a Mini Cooper fuels the fire of this monstrous track, littering the aural landscape with ash and debris. The brutality is utterly devastating.

Brutality is also the order of the day on ‘Backbreaker’. Nothing fancy here, just straight up ferocity as the title suggests. The energy is amazing; it is perfectly controlled chaos from three guys who know exactly what they’re doing when it comes to all things heavy. I think I’m gonna need a chiropractor by the end of this one.

‘All the Devils are Here’ starts off with the kind of triplet based tremolo picking I grew up loving. Heavy blasts and absolute carnage ensues, showcasing the influences of the old school death metal greats such as Bolt Thrower, with a welcome 21st century facelift. The riffs are razor sharp and the drumming is absolutely ferocious. Again the vocals display a tone of rage that never lets up.

The final track, ‘Nothing Seems Right’, is the longest on the record. Clocking in at just over seven minutes it is a dense and brooding soundscape of slower tempos and domineering atmosphere that entraps you in a fog of dissonant riffing, thunderous bass and steel bending drums. As the song progresses the guitars and drums intensify. This is truly a great ending to a stellar album.

‘With All Their Might’ is an album for those who love modern, aggressive death metal that pays homage to their old school forefathers. It is an extremely enjoyable listen. Even with the distinct lack of guitar leads, which is one of the things I personally look forward to on a record. the riffs, drums, basslines, vocal melodies and superb songwriting counteract their absence and keep me thoroughly entertained throughout the duration of the recording. An absolute must listen for fans of brutal, honest and well structured metal.

Review by Phil Noonan
Posted by Jonny at 3:02 pm