ALBUM REVIEW: Belphegor offer up the best of death and black on the awesome Totenritual

FOLLOWING their 2014 album Conjuring the Dead Austrian blackened death metal trio Belphegor are back with Totenritual, a satanic slice of demonic roars, blistering riffs and blastbeats that will certainly send your friendly neighbourhood Christians running for cover.

'Totenritual' consists of nine pummelling tracks to bring about the apocalypse. The first  track,'Baphomet' delivers from the get go. Devastating riffs and inhuman double kicks drumming smack you in the face from the first note. The vocals are formidable, jumping effortlessly between guttural death metal roars and black metal shrieks. Blastbeats and hefty riffs are the order of the day on this track, a great opener and a small taste of the horrors to come.

'The Devils Son' starts off with an ominous message, “you are tainted, the devil is in your flesh!” followed by a hair raising scream and breakneck blasts. Evil shredding and some tasty leads ensue as the colossal bellows of Helmuth Lehner cut through the Satanic noises of hell. 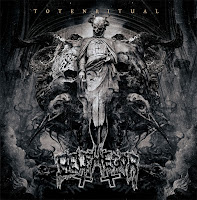 The outro is beautiful  (yes I just described a Belphegor song as beautiful!), acoustic guitars fade out the song and into 'Swinefever – Regent of Pigs' which contains an audioclip of the Exorcist III. The riffs and drumbeats are extremely heavy - heavy like Thor’s hammer heavy. Punishing and brutal the song thunders along at breakneck speed. The drumming is insane and the vocals are absolutely crushing. The leadwork fits the song perfectly with chaotic fretwork and the howls and roars make the atmosphere more dense than that simple cousin everyone of us seems to have.

Fourth track, 'Apophis – Black Dragon' has one of the greatest black/death riffs to be heard in a long while. The blastbeats, the chainsaw like guitars and vocals that can only be described as like a demonic possession victim reminds me so much of the aggressive sound of the Swedish black metal scene.

The next track, 'Totenkult – Exegesis of Deterioration' begins with what can only be described as what a mental hospital would sound like, followed by vicious blasts and a chugging, grinding riff giving way to supersonic axework and the hammers of hell trying to break through Earth’s surface.

It’s so immensely heavy and brutal, and those throat ripping roars just add to the weight. The leadwork is superb, a perfect balance of melody and chaos.

Following up 'Totenkul'” is 'Totenbeschwörer', a creepy midpaced instrumental that really gets under your skin, a great little piece of evil music to contemplate where you might be heading when you die.

'Spell of Reflection' doesn’t take any time at all stabbing your ears with a skull crushing death metal riff and midpaced pounding drums to match. The vocals are just so evil, it’s like listening to Linda Blair on one of her bad days and it’s glorious.

Shredding and double kicks batter your ear canals until they bleed. You’re gonna need a neck brace after this one.

Track eight, 'Embracing a Star' lures you into a false sense of security with a chilling free bars of acoustic guitar work before military precision drumming kicks in and chanted verses like the sinister black mass you were too afraid to attend. The track picks up into blastbeats, blastbeats and even more blastbeats.

Tremolo picked black metal grinding cuts through the song, and the devilish spewing of blasphemy would make even the most badass of badasses tremble. Waves of dissonance and ill will surround this track. Absolutely brilliant.

The ninth and final track is 'Totenritual' itself, and what an end to this terrifyingly wondrous album...

It’s just pure blackened nastiness at its absolute best. Horrifically heavy and so fast it would leave a formula one driver thinking “wtf?”, Totenritual is demonic, aggressive and embodies the best aspects of the genre.


Totenritual is available from Nuclear Blast - Belphegor play Belfast with Destroyer 666 and others at The Limelight on October 12th... 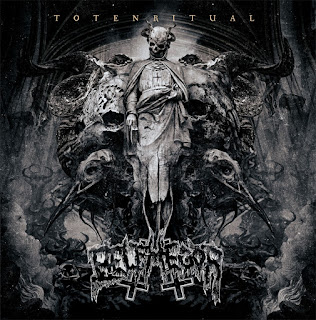