ALBUM REVIEW: Wayward Sons bring the boom on Ghosts of Yet To Come

WE have always had a large amount of admiration for Toby Jepson - his work with Gun, Little Angels and solo recording, not to mention his production credits. When news filtered through that he had assembled a new band thoughts turned to whether he could remain at the top of his game with Wayward Sons.

But when you have rockers of the calibre of Sam Wood, Nic Wastell, Dave Kemp and Phil Martini you have the collective experience of not only Jepson's bands, but a resumé that includes Spear of Destiny, Treason Kings and Chrome Molly brought to bear.

Thus their début album 'Ghosts of Yet To Come' is a true hard rocking release that recalls the 90s, with more than a smidgeon of a tip of the hat to classic acts from the 70s and 80s. 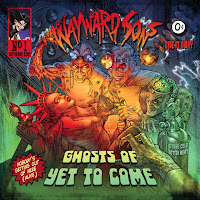 Throughout the riffs and melodies are to the fore, especially on the immense track 'Ghost' and the mid-pace rollick of 'I Don't Want to Go'.

What makes it an enjoyable album is that they are not as clichéd as many of their contemporaries; sure they are treading a similar path, and they nod to their predecessors for example the likes of 'Give It Away' has echoes of The Fountains of Wayne 'Stacy's Mom'.

The album is a trip through memories, but brought right up to date. Jepson is as always giving every ounce into his performance, but with Wood to as a foil the solidity of the songs is clear. And Toby's social stance is present on the likes of 'Small Talk' - a refreshing diversion from others more bland rock lyrics: "I was born into Thatcher's Disaster" is a memorable line.

Many will have the benefit of having samples of the album through the band's decision to release a series of their tracks (four in total) on YouTube, but they should merely be an encouragement to buy this album.

The urgent melodies of 'Crush' are just a flavour of what the rest of the tracks offer (see video below).

For fans of true hard rock this is an essential buy. Unfortunately they won't be with Inglorious in Belfast, unlike other parts of the tour, but hopefully they will land in Northern Ireland soon to give us all a treat with their melodic boom.