ALBUM REVIEW: Peter and the Test Tube Babies on form with That Shallot

EVER since Peter and the Test Tube Babies released their song 'The Queen Gives Good Blow Jobs' we knew they were something special. Although bundled along with the likes of Splodgenessabounds' they were more straightforward and felt more 'punk'.

Over the years they have not mellowed despite growing older. If anything they sound more bitter - and that's not a bad thing in context. 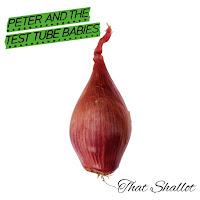 With the imminent release of new album 'That Shallot' and the beginnings of a mini-punk revival Peter and the Test Tube Babies have an opportunity to reach out to those that missed the late 70s/early 80s days.

Bywaters voice still resounds with anger and vitriol and Del Strangefish buzz sawing guitar lines are delivered as if his hands are afire with passion.

The 14 tracks on 'That Shallot' are punched out in a torrent, with the longest clocking in at an 'epic' 3:55 (closer 'Pissedenstein'  - a rant on alcohol).

Not that they are all one-dimensional. The horns and sulty singing on 'Tramp Killer' sounds like the sort of opener for a really twisted Bond film. The faux country styling of the hilarious 'Silicone Beer Gut' makes it, in much the same way as Nuclear Assault's 'Long Haired Asshole'.

Railing against relationships on 'Wrong' 'Honesty' and 'When Girlfriends Attack' have an edge that could easily be misunderstood, but let's face it there is humour by the bucket load.

There is also real anger, barely tempered with wit, that will resonate such as 'None of Your Fucking Business' and 'What Next'. For all of the early absurdity Peter and the Test Tube Babies have never shied away from the anger. Whether he was really refused entry to the US for criticising Trump or had visa irregularities matter not - it is really 'None of Your Fucking Business'.

And taking a swipe at the pop punk staples of TV video shows 'Crap Californian Punk Band' they remind the bands earning fortunes that the UK punks carved the path they are cashing in by re-treading it.

Never mind the individual elements taken as a whole 'That Shallot' reminds us all that the early wave of punk bands are still as vibrant and entertaining as ever, and age will never dull the snarl or anger.

In an era of conservatism, the Conservative Party, Brexit, gambling websites, Trump, families with 2.2 children and a Golden Retriever, North Korea et al this serves as a reminder that in the extremities of music there are awkward truths around the world that need to be told. And, if you can do that with a smile, all the better.


That Shallot is released on Arising Empire on 15th September