WITH 'One Man Army' Ensiferum set the bar high for folk metal, with an almost live feel. The subsequent extensive touring showcased a band at the proverbial top of their game.

But unlike many bands the Helsinki act were already planning their next release well ahead of time, with these tracks on new release 'Two Paths' demoed seven years ago - yes seven years. Talk about foresight... 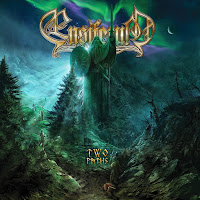 Having these tracks in formative structure at the turn of the decade could have made them stale, but in the seven years hence they have been beaten into glorious shape. In short 'Two Paths' is as close to the ultimate 'folk metal' album as you'll get.

All the elements from Ensiferum are there, with the added bonus of touring accordionist Netta Skog, formerly of Turisas, now a full-time member of the band, adding another vocal texture.

From the opening orchestral and choral intro 'Two Paths' gives you the expected grunt on 'For Those About To Fight For Metal', with flurries of guitar and growls plus huge choir like melodies.

While this is about as 'typical' as you would expect in the genre it veers close to cliché in places - but is saved by the arrangement.

However, the rest of the album is anything but clichéd. The reason for this could be attributed to the length of the writing of the tracks, or the organic, analog recording and producer Anssi Kippo's insistence on getting the right instrument's tones from the off.


Anssi has a really great recording method, in that he wants to find the best possible sound and tone for drums, bass, guitars, vocals etcetera at the start, so that as you finish the individual tracks it's close to what you want the final sound of the album to be. That way, you don't have to ponder over what you can do in the mixing." -  Hinnka

The result are tracks that sound massive - whether it is full-on such as 'Way Of The Warrior' or 'King of Storms' or the quieter tracks, such as Netta's vocals on 'Unettomann Aikaan', all sound as if they were created as if to address a gathering deep in a primeval forest.

Title track 'Two Paths' opens with an almost rock-like riff from the 80s before upping the ante in a song delivered with clean vocals with a wistful edge and no shite tools to mask the feeling.

That Markus, Petri, Sami and Netta all contribute different singing textures makes every element of the album as varied and challenging as possible.

'Feast of the Valkyries' sees Netta opening the vocals and delivering a masterclass on digital accordion before the chorus as if delivered by Finnish warriors storming the land of the Russ.

Lyrically throughout, as always, there is more than what may appear on the heroic sounding surface.

"For me, it's really important that all lyrics have deeper, more serious and sometimes very personal meaning, while also fitting Ensiferum's heroic theme. It's a nice challenge to write lyrics this way, but it's also really rewarding to hear fans' interpretations of our music. There is no right or wrong in this matter." - Hiinnka

On 'Don't You Say' and 'God is Dead' the band challenge the listener even further by offering two versions, with Hinnka offering Ensiferum fans the chance to pick their favourite version.

'Don't You Say' opens with a drum line that nods to Priest before becoming a piece of groove infected folk, while 'I Will Never Kneel' is defiantly superb.

It would be easy to rant further about how good 'Two Paths' sounds. It is gritty, catchy and orchestral in equal parts.

Amidst the might and grandeur Ensiferum display a lightness of touch - in even the heavier elements - that demonstrates that this is no longer another folk metal act. Not only will they stake their claim to be among one of the originators, they are a force of nature to bow in admiration before. Madly beautiful... 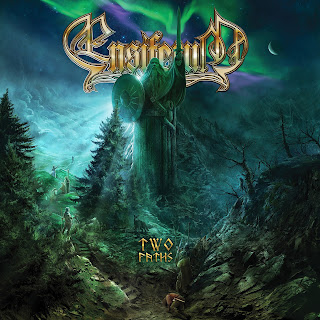