FINNISH power metal maestros Thaurorod may have slipped below many a metal fans radar to date, but with the release of 'Coast of Gold' they will no longer be just another European band.

This album is a stunning exposition of what can be achieved by a band with the confidence to explore their musical ability. 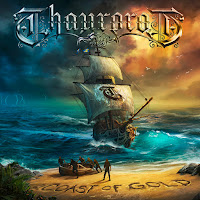 From the almost 80's sounding keyboard intro on opener 'The Commonwealth Lives' the listener is aurally assaulted by rampaging riffs, battered by double bass runs, seared with solos on guitar and keys and swept away with muscular melodies.

The hyperbole is justified. Sure they are on the 'same page' as Dragonforce et al, but they take the template and add their own nitro that could launch the 'genre' that bit further.

And, the song that could do this is 'Cannibal Island'. From the sweet child's voice and the mid-paced opening it develops into an almost impossibly catchy tune Andi Kravljaca vocal gymnastics sounding impassioned and filled with glory and gore as he recounts the horror.

Throughout 'Coast Of Gold' the combination of Emil Pohjalainen, Lass Nyman's guitars and Harri Koskela's keyboards provide a deft weft and weaving, never over-powering the song.

The nods to their influences are clear - the opening piano of '24601' nods to Jovi's 'Runaway' before developing gradually into a show-stopping tune, texture emerging into a full throttle battle.

And, that combination from almost 'Battle Metal' and 'Power Metal' will have the hair splitters arguing for weeks, but the reality is this is simply a great heavy metal album. It's the sort of album you could play your "non-metal" friend and have them hooked after the first listen.

It is, however, not all pedal to the metal, with on the penultimate track, the delicate 'Halla' gives a counterpoint, a sense of the Finnish landscape and the sound of seaborne adventures.

While the lyrical content does have a mariner's tale twists, it is not a forced concept, it is incidental to the enjoyment of Thaurorod on this album.

Blasting through the closer 'Illuminati' in all its intensity and power as it ends the first thought is to play the entire album again. No better recommendation can there be.

'Coast of Gold' is released on Drakkar Entertainment on February 16th 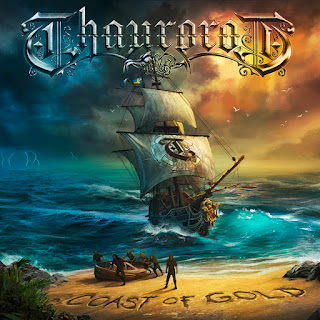