WITH his 10th solo album Blaze Bayley concludes the 'Infinite Entanglement' trilogy with the 'Redemption of William Black' - and what a conclusion it is!

Across 11 tracks there is sweeping vision in terms of the music and storyline: classic metal in what deserves to be a widely heard album.

Bayley, as always is on top form, resonant and passionate vocals that send shivers down the back of the listener's neck on the likes of 'Life Goes On'. 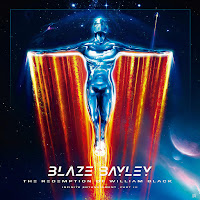 However, to pick out any individual track does this album a disservice. It was always an ambitious project to take on such an extended high sci-fi concept. And, on the previous two releases it was not always as coherent. This time it is nailed like a laser jack hammer.

True, there are times when some verses are a little bit formulaic to enable the narrative to develop, such as on 'The First True Sign', but this is a very minor niggle and doesn't affect the enjoyment. Indeed many will feel the exposition necessary.

What is clear that Bayley has collaborators who share his musical vision to complete the Entanglement story. Iced Earth and Absolva's Luke Appleton puts in a sterling showing, while brother Chris, who co-wrote with Bayley, is integral to the sound.

Luke provides backing vocals, and Fozzy's Chris Jericho adds a lending guest spot on the first single 'Prayers of Light' with a voice spot as well as backing vocals. And, it is simply a super, rolling melodic metal track. The defiant "Now we stand and fight!"' is sure to be called out by fans when played live.

The guests, range of voice actors, Chris Appleton's well-balanced soloing all contribute but it is hard not to be fixated on Bayley's singing. It is simply stunning in its range and emotional timbre.

With Bayley's voice rightly dominant, the counterpoint of Liz Owen on '18 Days' comes as a delicate voice amidst the maelstrom of the story, a rollicking challenge to the lead character's intentions.

Owen also wrote the wondrous 'Already Won', which again features the Appleton brothers integrated work-outs and a chorus that soars.

Those choruses that run like a vein of gold across the tracks are so 'right' that each and every song could stand on their own on merits. Combined they produce a platinum album.

The narrative is neatly encapsulated on 'Life Goes On' as the regrets are poured out in a power ballad of sorts, with Bayley's voice dripping in remorse and self-realisation. Who knows if it is allegorical other than Blaze himself, but it is a song many of us can relate to.

Concluding the album are two songs that wrap the tale up with the speed of 'The Dark Side of Black'  and the epic 'Eagle Spirit', an almost nine minute ending that ends the story in a rightly extended from its doom-laden voice introduction, and pained vocal start to the song.

That the 'Infinite Entanglement' ends with such a stunning song feels appropriate, a true redemption, defiant and complete. "If we can hold on to what we believe, they'll never break us" sums it all up. And, if it is allegorical then we sense that Bayley has gotten a story off his chest.

No matter whether it is or not 'The Redemption of William Black' is an album to treasure.


The Redemption of William Black is released on 2nd March.
Later in the year a vinyl edition will be released with accompanying materials 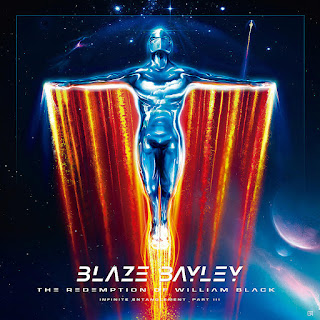