ALBUM REVIEW: Harmonica hard rock covers from Will Wilde on 'Bring It On Home'

WHEN a PR company sends you an album of hard rock with a harmonica the featured instrument for  moment you wonder if rock n roll has finally jumped the shark...or are you tripping from something someone gave you at a festival last year.

But being obligated to at least give it a chance one reads the press release about harmonica maestro Will Wilde and discover it is an album of cover versions...the 'Dubious Hat' is donned; a stiff drink is poured and a deep breath taken. 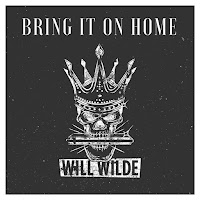 Well, for a Northern Ireland-based site it's always a good sign when our late adopted son, Rory Gallagher's track 'Bad Penny' opens the proceedings. Faithful cover with the bluesy tones of Rory's playing given a unique subtle twist.

'Bring It On Home: A Tribute to British and Irish Blues and Rock' is, however, a strange beast. The covers of the tracks are given that expressive harmonica touch, even if some are penalty kicks, such as Sabbath's 'The Wizard'.

Others are given an extra dimension, in particular Deep Purple's 'Lazy' that is given a real bluesy touch.

But there is an issue here. Wilde is such a tremendous harmonica player that we were left begging to hear original tracks - hard rockin' harmonica groove.

That being said it is an enjoyable listen - you can check out the bonus track and video of Wilde's 'Parisienne Walkways' and hear his soulful playing.

That he has ambitions is clear by taking on Tull's 'Locomotive Breath' where the song is given an extra dimension, that would have been a perfect cover with some more aggressiveness in the vocal delivery.

The unique tunings of his harmonica mean he can reach tones and notes that match guitar lines.

As such he stand-out song is 'Bring It On Home' a great interpretation of 'Sonny Boy Williamson/Led Zeppelin that is leant an urgency by Wilde's playing.

This is a great covers album but it would have been a much better collection with some of this talented man's own songs.

Bring It On Home is released on March 9th

Email ThisBlogThis!Share to TwitterShare to FacebookShare to Pinterest
Labels: Bring it on home, Deep Purple, Led Zeppelin, Rory Gallagher, The Wizard, Will Wilde