IF you think Stormzone are just an ordinary heavy metal band you are about to be handed your ass on a sling with the release of Lucifer's Factory -powerful, story driven, searing metal with real heart.

And, with lyrical content that delves deep into Northern Ireland's mystical and dark past it elevates the band to heights that is a true evolution for them.

As 'Dark Hedges' opens it is immediately apparent that this an album with added nitro. No longer with the band Gordy's recording sees the drums propels the opener to a frenzied start. 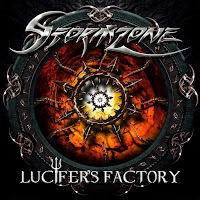 Hold on to your ball sack as this is a ferocious start, all wrapped around the area made famous by Game of Thrones, but delving into the dancing ghost of the dark lady...'ware the tourists on June nights.

That is just a hint of what the band achieve on this release...There are no dud tracks, there are no 'fillers'. The playing from all is impressive, the composition and arrangements are flawless.

While it is easy to see Northern Ireland band's through rose (green?) tinted glasses, and to be overly effusive, had this landed in the inbox knowing nothing about the band it would get still get a great review.

The tragedy of the title track, driven along by some tasty bass work from Graham merges into the tale of the infamous highwayman 'Cushy Glen' that manages that delicate trick of keeping it metallic with just enough of a Celtic twist.

The furious riffing of Steve and Junior is better than the band have ever managed; someone slipped them the secret elixir to give them the patterns to merge the rhythm section blow for blow. And, as for the soloing - tempered in places, off the proverbial scale in other sections, but always perfectly matching the lyrical subject matter. The roving solo for 'Last Night In Hell' is a case in point.

As history buffs the lyrical themes, whilst well known to us, explore the netherworld that helped create the nation we occupy, back in the mists of time.

Bram Stoker may have penned 'Dracula' but there is considerable evidence that his inspiration was from the North West vampire 'Albhartach'. In the recounting of this tale the band move forward as if fleeing the devil, racing before the gates of hell close.

'We Are Strong' is probably the closest to what one would normally expect from Stormzone - and given that would be great in itself it has all the elements as Harv narrates defiance before the chorus primes everyone to join in when this beast is played.

On 'Broken Window' the insistent opening gives way to a mid-paced prowling panther of a song, menace dripping off every note as the County Antrim opening to Satan's lair, the doorway to the Inferno is recounted.

The darkness that Harv explores in the words is more than just the typical metal poses and pretences. For example, fuck your trick and treat twats, firework obsessed, dickhead commercialism - listen to one of the real sources on 'Hallow's Eve' and when October 31st just check the footprints around the hearth.

It is not just, however. the mythos of Ulster that is explored. 'The Last Goodbye' has all its roots - literally' in the shipwreck of the Spanish Armada ship, The Girona (worth a visit to the Ulster Museum with this track on the headphones...).

As for 'In For The Kill'...just listen and marvel. No more need to wax lyrical about this muscular behemoth of metal.

As the final chords of the plaintive closer 'Time To Go' fade (there is a bonus track on the physical version) what is clear is that Stormzone have taken a massive risk. Heavier than before, ample helpings of heft and exploring themes that each could be a concept album in their own right.

The risk paid off.

This is an essential purchase - simple as that.


Lucifer's Factory is launched at the Diamond Rock Club on Saturday, February 24th in a joint show that will also see A Little Bitter launch Arrows 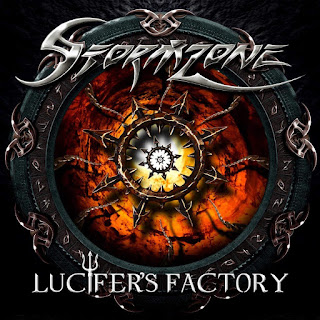