NEWS: Saxon to re-issue Princess of the Night 7"

SAXON are set to release a limited edition, clear vinyl replica of their iconic 1981 7” single ‘Princess Of The Night’ on 21st April, as part of Record Store Day 2018.

Taken from their seminal album ‘Denim And Leather’, Princess Of The Night is a firm fan favourite and their most played song on Spotify. 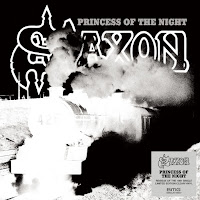 Saxon – Princess Of The Night 7” - available at your local record store on 21st April!”

Email ThisBlogThis!Share to TwitterShare to FacebookShare to Pinterest
Labels: Princess of the Night, Saxon