AL Joursengen is one pissed off, angry and fucked off man: a contrarian and an absorber of thoughts and ideas. And, right now he has his sights set on the fucked up state of his home nation - the United Stats of America.

'AmeriKKant' may be the 14th Ministry album, but it is also dripping with fury and fire, layers and layers of intensity - in fact all sorts of layers. 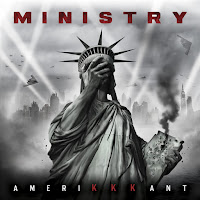 There are samples drizzled throughout like honey spiked with vitriol. The venom expressed by Joursengen drips like acid on exposed moral bankruptcy.

But, before taking on board the multiple of messages Al wants us to absorb there is a need to examine the music, especially given that he has assembled a new crew of misfits.

As with all Ministry releases you should be prepared to absorb what is going on beyond the top - the rhythm, the guitar lines and the overwhelming at times industrial sound that crams everything on top of everything else.

It is a soundtrack of not only a dystopian future, but a dystopian present...taut and rebellious.

However, it is worth saying that AmeriKKant does not compromise. Given the weight of the message Al wishes to deliver it would have been easy for the band to step back and give the words and samples space.

Instead it all crowds in on top of itself, toppling upon the listener like a aural avalanche that oppresses and forces you to listen to make sense of the wall that is collapsing on top, crushing you amidst the wall of sound.

'Twilight Zone' and 'Victims of a Clown' each clock in at over eight minutes; 16 glorious minutes of shock and awe; 16 minutes that challenge what you think.

Charlie Chaplin's speech from 'The Great Dictator' sampled alongside Trump and voices of the left and right means that rather than one listen it requires repeated listens to see the totality of what Joursengen is diving at.

Whilst the title track, 'We're Tired Of It' and the controversial 'Antifa' are great tunes in and of themselves this is an album that is going to drive divisions.

Not that Al and his cohorts give a fuck about that. Like the UK political punks taking a stand in the late 70s and 80s AmeriKKant sees Ministry take a stand.

And, amidst the banality of the mainstream music our global culture we need bands like Ministry to make a statement.